Ya’ll remember Nelson, Georgia, yeah? Folks there passed a law back in April that required the town’s entire population — around 1,300 residents — to keep and bear arms for self-defense —  well, sort of.

To clarify, the five-member community council did unanimously approve the ‘Family Protection Ordinance,’ which reads as follows:

However, as noted in a previous Guns.com article, the law is not ironclad. In reality, it’s all bark and no bite. Consider, for example, that it officially exempts criminals, the mentally ill, those who are mentally or physically handicapped and, in practice, anyone who is philosophically opposed to gun ownership.

In short, as City Council member Jackie Jarrett explained, to local new affiliate FOX 5, “Technically, if you don’t want one to have one, you don’t have to have one. So in fact, it’s just a statement.”

Indeed. Its inception was really a response to the gun control talks taking place in Washington following the mass shooting at Sandy Hook Elementary School. So, yes, the law appears to be a simple political statement the Obama administration and pro-gun control lawmakers on the Hill, something along the lines of, ‘We’re not going to obey your onerous federal gun laws.’

Also, on a more practical level, the town only has one police officer and supporters have claimed this ordinance will make criminals think twice.

Yet despite the fact that the law is not enforced, the mighty Brady Center to Prevent Gun Violence has filed a lawsuit challenging the Constitutionality of the ordinance, arguing that it violates citizens’ First, Second, and Fourteenth Amendment rights.

Moreover, the suit alleges that one resident in particular, Harold Lamar Kellet, was forced to purchase a handgun and ammunition that cost him approximately $700, which is an unnecessary financial burden.

Citing that the law has a $1,000 fine for non-compliance, Brady complained that the ordinance “has stripped Mr. Kellett of his right to determine how best to protect his home and compelled him to take action and communicate with the public in a manner he would not otherwise have done,” according to the suit, as reported by CNN.

Though, in a press release Brady Center’s Legal Action Project Director Jonathan Lowy also seemed to imply that this fight was not only about Kellet’s situation, but also about the growing popularity of gun culture in America.

“Most Americans reject the gun lobby’s vision of an America in which the government can force guns into every sector of society,” said Lowy. “In this lawsuit we seek to establish that the government does not have the authority to compel Americans to buy guns or bring them into their homes 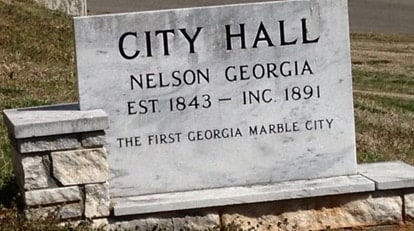 “Forcing residents to buy guns they do not want or need won’t make the City of Nelson or its people any safer, and only serves to increase gun sales and gun industry profits,” continued Lowy. “A gun brought into your home is far more likely to be used to injure or kill a family member, than to ward off an intruder.”

What’s also fascinating is that in at least one media interview back in April, Kellet seemed to understand that the ordinance was all for show, that he wasn’t really going to be compelled to do anything.

“Why have an ordinance if you’re not going to enforce it? What’s the point? They just want publicity to say Nelson is a town full of weapons,” Kellett told local news affiliate WSBTV.

At the time Kellet claimed that he wasn’t anti-gun, but just against government overstepping its bounds.

“This is big government at its worst. Government mandating what a free individual can and will have in his home,” Kellett said.

So, at the end of the day it appears that like the law itself, the lawsuit is merely just for show. A way to punch back at a community that by and large values its constitutional right to keep and bear arms. That, and as other community members pointed out, a way to prevent other towns from following suit. After all, the last thing the Brady wants is more communities wholeheartedly embracing gun ownership.

All that said, what are your thoughts?  Does the Brady Center have a legitimate argument?