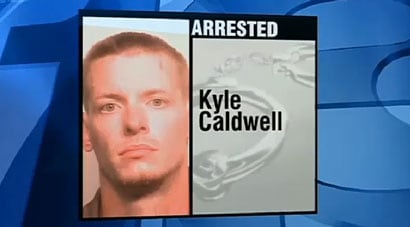 A woman in Toledo, Ohio, found herself the victim of an attempted home invasion on Thursday. After having her car broken into two mornings in a row, she refused to be a victim for a third time, especially not in her own home. She stopped the intruder before he kicked the door in, holding him at gunpoint until the police arrived.

According to a report by an ABC affiliate, the incident happened just before 5 a.m. Betty Collins was home alone, her boyfriend, Mike Billick, had just left for work. However, he was at a nearby gas station when he noticed a man, who he described as suspicious, wearing only shoes and shorts, walking up towards their home. He called Collins to warn her, and she grabbed her gun. Collins then ordered him off of her porch and told him to get down. He dropped to his knees, but then she said, “No. Put your face in the dirt.” And that’s where he stayed until the police arrived.

Caldwell was arrested and is due to be arraigned this morning, but he’s lucky to be spending his nights in jail instead of the hospital, or even worse.

Collins, who is working on getting her Ph.D., in Criminal Justice from The University of Toledo, said she didn’t shoot him, as she was thinking about a homeowner a few streets over who shot and killed a 24-year-old who was trying to break into his home. Billick states, “She could have shot him. If it was me, I would have.”

Collins has lived in the home for 13 years and said, “I’m not moving. This is my home. I will continue to protect my home. That’s what the Second Amendment is for.”