In the 1950s cars were made out of steel, cigarettes were a food group, and men scraped the hair from their face with a straight razor. That decade where Elvis was thin and everybody liked Ike was also the golden age of the battle rifle and Guns.com is looking at five classics:

What is a battle rifle? 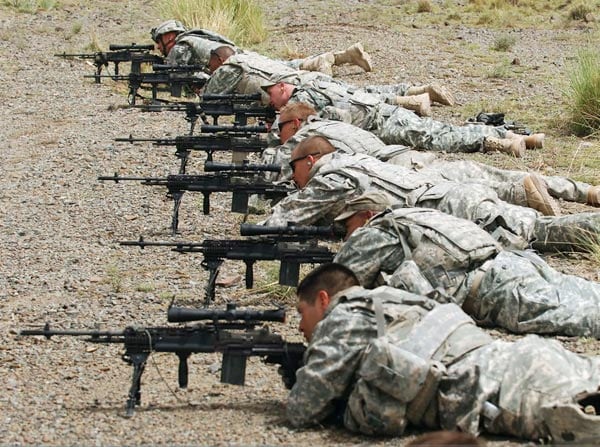 In 1953, the infant NATO military alliance adopted the US-developed 7.62×51mm T65E3 cartridge as its standard rifle round. This round was destined to replace the US .30-06 fired by the M1 Garand, the British .303 of the Commonwealth Armies, the 8mm Mauser of the West German Army and others. It brought to the table a shorter length round that still had the power of the cartridges it replaced—but with less recoil. This led to a number of so-called battle rifle designs, ending the 70-year reign of the bolt-action rifle in military service.

The adoption of these so-called ‘battle rifles’ greatly increased the firepower available to your average squad of infantry by a huge factor, while still maintaining accuracy out to 800-meters when needed. 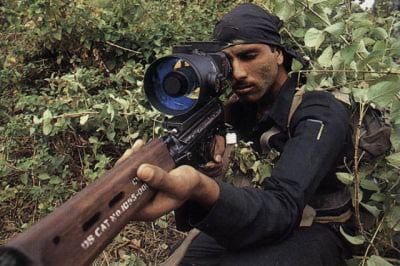 The Belgian gun works of Fabrique Nationale, long the West’s Santa’s workshop for small arms, had spent most of the 1950s on a battle rifle design. Engineered by Dieudonné Joseph Saive, the Belgian wonk that finished the Browning HP pistol and the slow-selling FN-49 rifle did much of the heavy lifting on what became the Fusil Automatique Léger (“Light Automatic Rifle”) or FAL. A gas-piston operated select-fire rifle that used a tilting breechblock, the FAL used detachable magazines ranging from flush-fitting 5-rounders to large 30-round beasts. Taking a gamble on the 7.62x51mm round before NATO officially adopted it, FN had the FAL ready for sale in 1954. 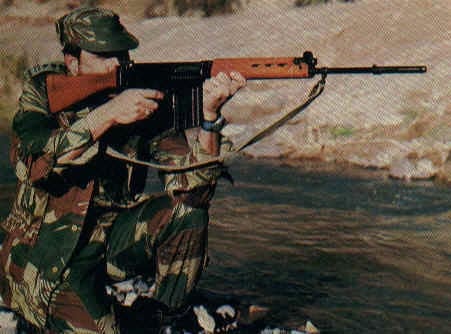 The gun was an instant hit and almost every country that didn’t already have free AK47s from the Soviet Union bought all they could carry. By the disco era, the FN FAL and its semi-auto variants (like the British L1A1) were found in the arsenals of more than 90 countries around the world.

The sheer number of FAL users has led to multiple conflicts in which both sides were armed with the same rifle including the Falkland Islands War in 1982 and the ever-increasing series of wars between India and Pakistan. 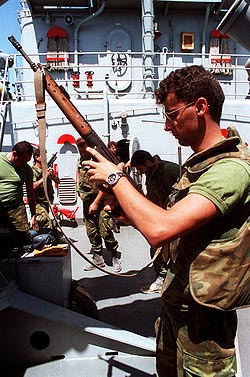 After WWII, a pair of German former Mauser technicians working in Spain borrowed an unproduced Mauser design, the StG 45(M), which used an innovative roller-delayed blowback method of action to make a new rifle. Their design, with a 20-round detachable box magazine, used a stamped sheet metal receiver like the first (German MP44) assault rifle, and a minimum of wooden furniture. It became the Spanish Army’s CETME rifle in 1957.  The gun was a 9-pound select fire battle rifle that could rock and roll at 500-rounds of 7.62 per minute. This rifle was later modified with a few internal changes and plastic furniture in place of wood and adopted by West Germany, Denmark, Greece, Norway and about 30 other countries as the G3.

One of the only complaints on these guns was the roller-delayed blowback action, originally designed for machine guns, was often too harsh to use in a rifle and lots of dented and ripped cases resulted from it. 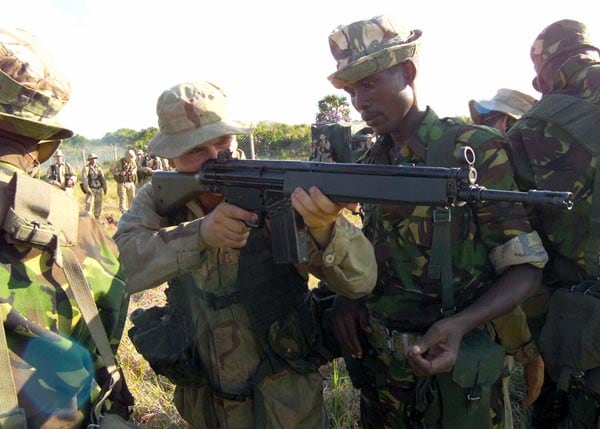 US marine levels up a G3, still trucking in Kenya. 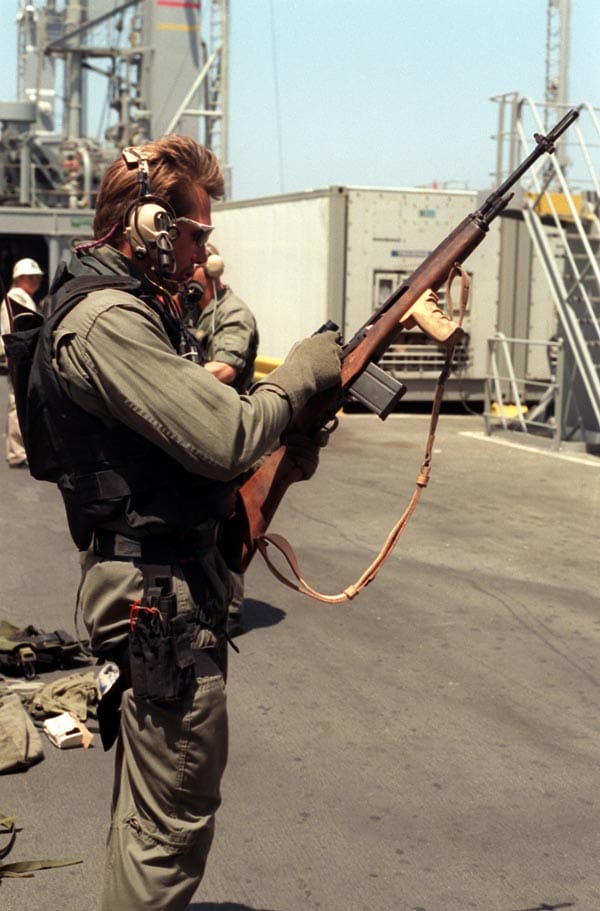 After almost a decade of development by Springfield Armory, the M14 rifle was placed in service in 1959—one of the last battle rifle designs to see the light of day. The ’14 from a distance resembled the WWII-era M1 that it replaced. Instead of the M1s eight shot enbloc clip, the M14 utilized a 20-round box magazine in 7.62 NATO and added the capability to fire full-auto (at 700rpms) when needed. This replaced both the BAR and the M1 in service and gave the GI of the time a nice gas-piston operated 9.2-pound rifle (10.7-pounds loaded) that could bring the pain on both ends of the barrel when fired.

Unfortunately, the gun was almost uncontrollable on full-auto and the full-length wood stock warped produced wandering zeros when used in the jungle, leading to its replacement, by the M16 series in the 1960s.

Take an M1, chamber it in 7.62 NATO then make it select fire and the rifle you’ll have is the Beretta BM59. 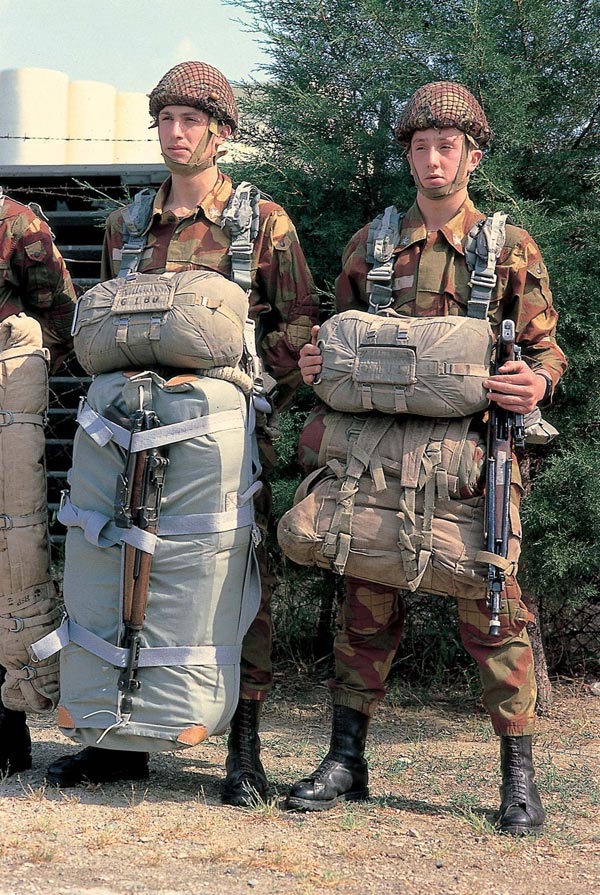 The Italians after WWII had adopted the US M1 Garand, which by all rights is a battle rifle itself albeit a semi-auto without a detachable magazine. The Italians loved the M1 so much that when the rest of the world ran out and adopted select-fire 7.62mm battle rifles in the 50s, all Italy did was have Beretta reverse engineer the M1 in 7.62, make it select fire, and give it the ability to use a 20-round box mag. As a bonus, these weapons could make use of the huge stockpiles of existing M1 parts. Problem solved, problem staying solved. The resulting design was the 9.4-pound BM59 rifle and the Italian military kept it around for the entire Cold War, even exporting it to Mexico, Indonesia, and Argentina where it is still used today.

In 1990, the BM59 was one of the last battle rifles withdrawn from service by a NATO army when the 5.56mm chambered Beretta AR70/90 replaced it.

The sole exception in this study that is not chambered in 7.62mm NATO is French—they went a little different and adopted this gun in 7.5x54mm. Ballistically it’s about the same but is not interchangeable. In 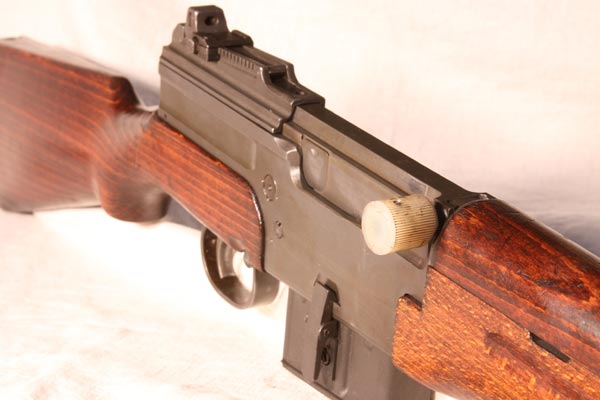 their defense, the MAS49 was designed in 1949 (hence the designation), which was about a half decade before the 7.62 NATO was adopted, but they also never changed over. Other issues with the rifle is that it used a direct impingement gas system (rather than the pistons of the M14, BM59, and the FAL), weighed 10.6-pounds, had a tiny 10-round magazine, and wasn’t select fire. Even a 1956 redesign of the gun, which shaved a pound of weight off, didn’t produce a superior rifle when compared to the FAL, G3, or M14.

Hey, the great “Stormin” Norman Schwarzkopf once said, “Going to war without France is like going deer hunting without your accordion.” Moreover, by looking at the MAS when compared to the other rifles of its time, you can see why. 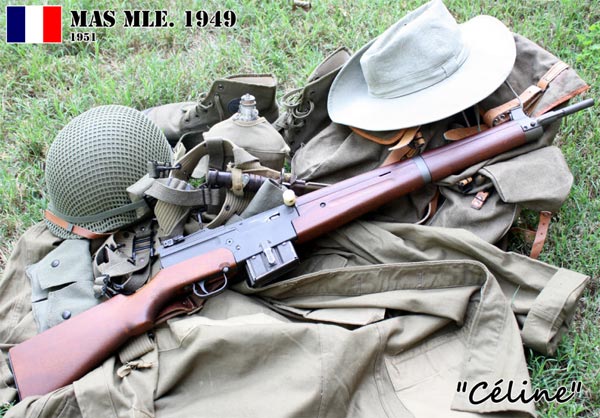 Overall, the 30-caliber battle rifle started to disappear in the mid-1960s when the US first augmented and replaced their M14s with the M16. By the late 1980s, the Brits had set aside their semi-auto FALs for the Enfield L85 in 5.56, the Germans replaced the G3 with the 5.56 chewing HK G53, and the French had forgone the MAS series rifles with the similarly chambered FAMAS. Today the occasional battle rifle shows up in the hands of snipers and in a few third world countries, but all in all, they mainly haunt the walls of collector’s gun safes.

Which is ok by us.