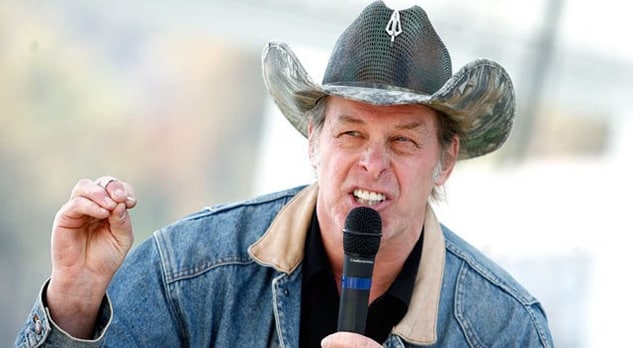 Ted Nugent responded to his brother Jeffery’s Washington Post op-ed in which he called out the conservative gun rights advocate’s stance on federal background checks. In Ted’s Newsmax kickback, the gun-totting rocker writes, “Universal background checks will not stop bug-eyed psychotics or paroled felons. Good guys with guns will stop them.”

Ted Nugent’s Perspective: Freedom of expression is so  beautifully American. Making that our very First Amendment is surely all the  proof one needs to know our founding fathers were revolutionary visionaries.

In this day and age of terminal apathy and soulless discontent, I adore  anyone who is an activist and stands up for what he or she believes. That is  exactly how our founders designed this experiment in self government.

My  loving brother Jeffery is becoming one of those activists, and I salute the  great man.  Never one to shy away from controversy, my brother wades into it.   We were raised right.

His recent opinion on his support for expanded  background checks for firearms purchasers is dead wrong, however.

Passing  expanded background checks would do nothing to curtail or suppress thugs or  psychos from accessing weapons and committing mass murder, carjacking, the  nightly shootouts in Chicago or a gangsta shooting at the Mother’s Day parade in  New Orleans.

Paroled thugs or bug-eyed psychotics could not care less  about any gun laws.  The bold and ugly reality is that they will always gain  access to a weapon.  I believe at his core, my brother knows this.

So,  knowing that evil will always have access to weapons, the point of universal  background checks, denying or restricting Americans the right to own standard  semi-auto weapons, high capacity magazines or various inademate hardware are all  moot, irrelevant points.