Alright. Given the title of this article, here’s an obvious question for ya:

In the wake of at least four major scandals — the fatally flawed gunrunning program: Operation Fast and Furious; the deadly terrorist attack at the American diplomatic mission in Benghazi, Libya; the targeted mistreatment of conservative-leaning non-profits at the hand of the Internal Revenue Service and the Justice Department’s controversial decision to subpoena phone records of journalists — can gun owners trust the government?

Well, what do you think?

Personally, I think most of us would agree that at its best, government is inept. At it’s worst, government is corrupt. Where does the Obama administration fall between these two paradigms?

I’ll leave that up to you to answer.

However, what I will point out is that everyone is beginning to take notice of the fact that the White House has seriously dropped the ball with respect to these scandals and that, as a result, it seriously undermines President Obama’s political agenda, including his push to reform the nation’s gun laws.

Consider for example what CNN personality and pro-gun control advocate Piers Morgan had to say on the subject during a recent episode of Piers Morgan Tonight:

“I’ve had some of the gun, pro-gun lobbyists on here, saying to me, ‘Well, the reason we need to be armed is because of tyranny from our own government,’ and I’ve always laughed at them [see Ben Shapiro interview below]. And I’ve always said ‘don’t be so ridiculous, your own government won’t turn itself on you,’” said Morgan.

Wow, gun owners need to stop and ask themselves, is Piers Morgan finally seeing the light?

Maybe, but don’t count on it.

Last Friday, Joe Scarborough of MSNBC’s Morning Joe had a similar revelation, noting that as a vocal supporter of the expanded background check bill drafted by Sens. Joe Manchin (D-WV) and Pat Toomey (R-PA) he feels as though he’s lost credibility because he told his audience, “Don’t worry, background checks will not lead to a national registry.”

Now, he’s not so sure he can make that promise. 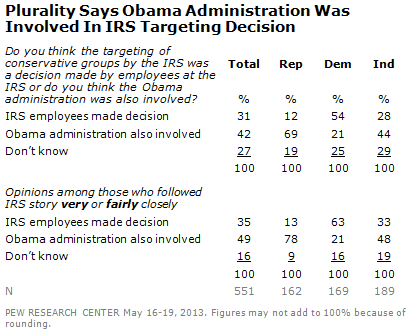 “My argument is less persuasive today because of these scandals … People say, ‘Hey, if they do this with the IRS, asking people what books you read, then how can I trust them with information about my Second Amendment rights?’”

“This IRS scandal is devastating, all across the board [for the Obama administration], Immigration reform, background checks, you name it, it’s a devastating scandal.”

In short, these scandals greatly damage the government’s credibility.

Polls seem to substantiate this reality. For example, the latest Washington Post/ABC poll found, “Last year’s deadly attack on a diplomatic outpost in Benghazi, Libya, is shaping up as a real political problem for President Obama, with concern extending well beyond the conservative base. More than half of Americans say his administration is trying to cover up the facts of the attack.”

Likewise, a recent Fox News Poll asked respondents whether they believed “the Obama administration is being open and transparent about Benghazi or is the administration trying to cover-up what happened there?”

Only 28 percent said the White House is being open and transparent, whereas 60 percent said it is trying to cover something up. Twelve percent answered “Don’t know.”

Final question: What effect, if any, do you think these scandals will ultimately have on Obama’s political agenda, including gun control reform?