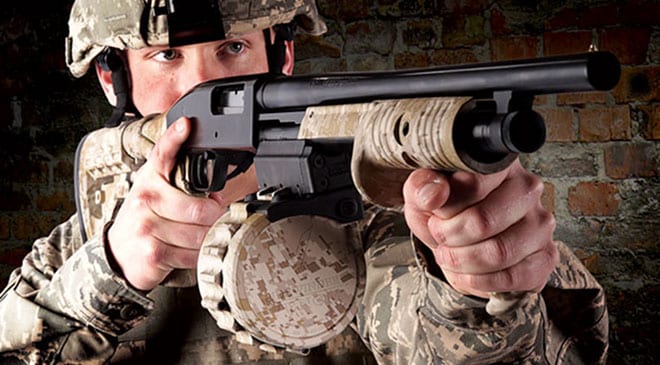 Adaptive Tactical has been developing their own in-house variants of Mossberg and Mossberg Maverick shotguns for a while now, and now they’re finally going to sell conversion kits for people who already own a shotgun and want to add a magazine adapter to it.

Called the Sidewinder Venom, the kits work with 5-round box magazines as well as 10-round drums. The kits also swap out the forend with a modular assembly that can accept forward pistol grips at 3- and 9-o’clock or lowered and offset to the left or right for a more ergonomic grip.

“Response to our re-engineered, preconfigured Shotgun Systems has been overwhelming,” said Adaptive Tactical CEO, Jim Bentley in a press release.” We’ve taken the next step and incorporated the same advancements into our Conversion Kits for at-home installation. We’re excited to make them available for shotgun enthusiasts who already own a Mossberg.”

The Venom-5 and Venom-10 kits will be available in matte black, while the Venom-SE comes in a variety of camo finishes including A-TACS, Multicam, Desert Digital and also flat black. Custom patterns can be ordered through water-transfer printing specialists at Adaptive Graphx.

If you don’t already own a shotgun, they’re still making complete firearms. They currently offer two versions, the Sidewinder Venom Maverick 88 pistol-grip model with a 5-round magazine with an MSRP of $600 in black and $660 in camo and the Sidewinder Venom Maverick 88 adjustable stock model with a 10-round drum for $650 in black and $720 in cam0.

The magazines, on the other hand, have relatively steep MSRPs at $60/$80 for the 5-rounders (black/camo) and $130/$150 for the drums (black/camo). Again, that’s suggested retail; you should be able to find them at dealers for a bit less than that.

Adaptive Tactical also offers belt carriers for mags and drums and range bags to keep all your kit together, as well as a handful of Ruger 10/22 stocks and accessories. For all the details, head over to the Adaptive Tactical website.