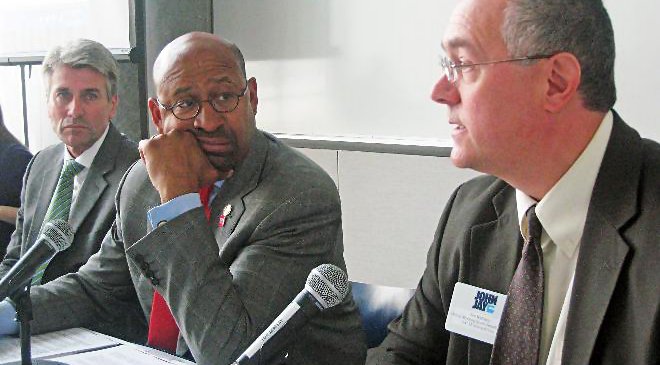 “Smart gun” technology is nothing new — people are naturally drawn to the idea of using technology, no matter how unfounded, to solve problems — the idea is that the gun has some sort of device that can identify legitimate users, preventing anyone else from using the gun.

Most smart gun designs use small radio systems that scan for the presence of a ring or bracelet worn by the gun’s approved users. After scanning for and detecting the digital lock in the gun’s proximity, the gun disables an internal safety, allowing the gun to be discharged.

These systems are flawed in that there is a delay between when the user picks up the gun and when the gun’s internal safety is taken off.

They are not always accurate in detecting the correct user, and because of their electronic nature, are susceptible to damage and water, and can be jammed remotely.

One company, Yardarm Technologies, would like that to be considered a feature. 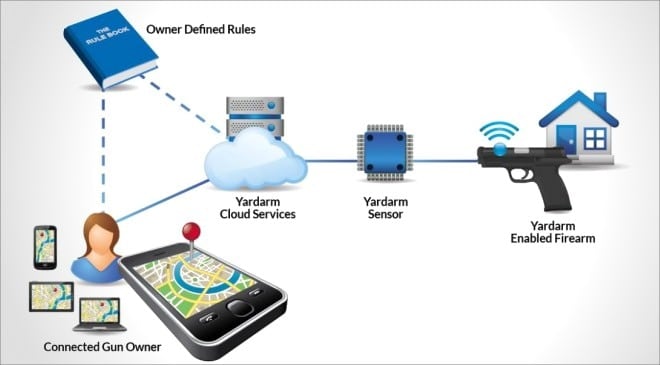 Yardarm Technologies uses a networked smart gun system that would track the location of the firearm, contacting its owner if it’s moved without his or her permission, and disable the gun if handled by unauthorized users.

“The idea is to connect gun owners more directly with their guns, no matter what the circumstance,” said Yardarm CEO Robert Stewart.

“Suppose you and your family are on vacation, and your firearm is back at home. Wouldn’t you want to know in real time if an intruder or worse, a child is handling your gun?” said Stewart in a press release. “With Yardarm, you could immediately disable the firearm, notify local law enforcement and maintain location awareness. We want the gun owner to stay connected to their firearm, no matter what the circumstance.”

Yardarm believes the system could be put into place for as little as $50 per gun with a $12 annual fee. They have not addressed possible shortcomings including presumably battery life.

Another issue that goes unmentioned is privacy. And what happens when Yardarm receives a police request or court-order to disable a gun without the owner’s approval?

The matter of smart guns was dusted off following the massacre at Sandy Hook, where the shooter used guns stolen from his mother after he killed her. Many presume that if some smart gun technology existed, he would not have been able to turn the weapons against others.

The shooter’s mother often took him shooting along with his brother, and he had full access to the family’s guns.

Despite this, certain lawmakers are still enamored with the concept of smart gun technology, convinced that it could save more lives than it would endanger.

In a conversation with Philadelphia Mayor Michael Nutter and Minneapolis Mayor R.T. Rybak Mossberg, the president of Mossberg Joe Bartozzi said that smart gun technology as it exists is not popular with gun owners, and that individuals and the industry hold it in a negative light.

“That indicates to me that they don’t want it,” Bartozzi said at a  John Jay College of Criminal Justice meeting.

“Why don’t you at least try?” Nutter responded. “Put it on the market, and see what happens.”

Citing a high rate of failure, certain juristictions, including all of New Jersey, have banned the use of smart gun technologies for police use. The budding technology is not trusted by law enforcement for law enforcement, so then it’s highly questionable if it’s ready for the general population.

Opponents of smart gun technologies have pointed out other problems such as, if the technology becomes mandatory, it’s essentially a tax on the right to bear arms, and that it won’t affect the 300-plus million guns already on the market.

Still, there are those who see it as a means to prevent stolen guns from getting used in crimes and suicides — something nobody wants to see.

Would you like to see “smart gun” technology developed further, assuming a perfect solution was possible? Or do you see this as “back door” gun control?