Burglar Shot, Killed by Homeowner Suspected to be Involved in Other Break-ins (VIDEO) 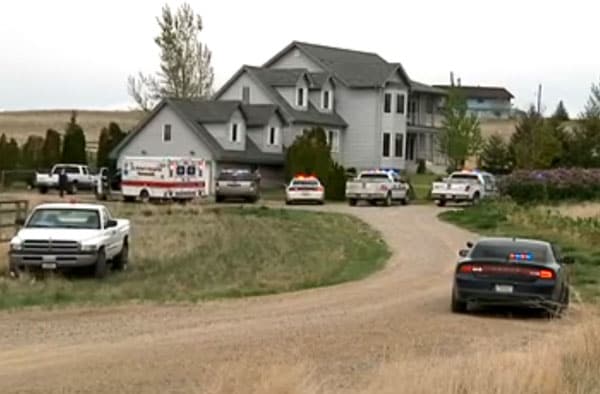 The Montana home where a burglar was shot and killed (Photo credit: KXLH, Helena)

A man in the East Helena Valley of Montana returned home on Wednesday afternoon to find that someone had broken into his house. Only the burglar was still in the home and upon confronting him the homeowner shot and killed him. A report by a local news station states that police are now investigating the possibility that the same burglar is linked to at least two other home burglaries in the area.

According to the Lewis & Clark County Sheriff’s Department, they received a 911 call around 2:40 in the afternoon from the homeowner, who told them that he had just shot a man who he found had broken into his home in an attempt to steal valuables.

The homeowner fired one shot at the man, hitting him once in the chest. The man then broke a window from the inside of the home in an attempt to quickly escape from the armed homeowner. He tried to drive off in a car, which police say was not registered to him, but hit a nearby fence. The man, who has not yet been identified, died in the car as a result of the gunshot wound.

Authorities say that shortly after receiving the 911 call from the homeowner, they received other calls in the area of houses that had been burglarized. Police feel that the incidents may be connected, as the manner in which they were all broken into were similar and pillow cases were found that may tie the scenes together. Apparently the pillow cases had been taken from the homes and used to gather items within the homes.

The Montana Highway Patrol is processing the scene of the shooting, working from the outside through the inside of the home, a procedure which they say is time consuming.

Police are not saying whether the man acted alone in the burglaries or if he was armed with a firearm or any other type of weapon.

The homeowner was not injured during the incident.

A special thanks to Guns.com fan Devin Healy for sharing this story with us.