HITRON: Hunting drug dealers from helicopters with the USCG (VIDEO)

The United States Coast Guard has, since 1916, been the preeminent maritime law enforcement and search and rescue agency in the country. This odd coin with two very different sides has produced a military force that has to be flexible to meet challenges that no one could imagine a hundred years ago. To stop the myriad of high tech superfast smugglers who try to outrun the fuzz, the Coasties have created a unique unit to take super high-powered rifles to the air. These helicopter borne snipers are the men and women of the Helicopter Interdiction Tactical Squadron (HITRON). 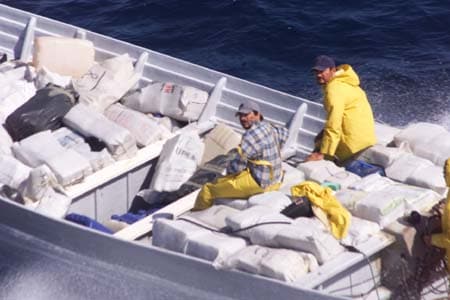 Illegal drugs are brought into the country through various smuggling methods: by vehicles over land borders, by underwater narco-submarines, by aircraft, and by boat. One of the most effective types of boats for this is the ‘go-fast’.

A small cigarette boat-style offshore power racer to which as many as a half dozen huge outboard motors are affixed, these speed demons can break 80-knots and outrun almost anything on the surface of the sea. Made from fiberglass and with a small cross-section, they are very hard to spot on surface search radar, making them the ideal delivery vehicles for the narco traffickers.

During Prohibition (1920-1933), the Coast Guard found itself on the front lines of the war against illegal booze. Rum Runners, speedboat operators who smuggled in liquor from Canadian and European supply ships just offshore, easily outran the Coasties cutters. This led the Coast Guard to acquire a new generation of ships fast enough to catch this new threat. Heavily armed, the war against the rumrunners grew hot on more than a few occasions with gunfights breaking out and more than a few smugglers finding their way to Davy Jones Locker. 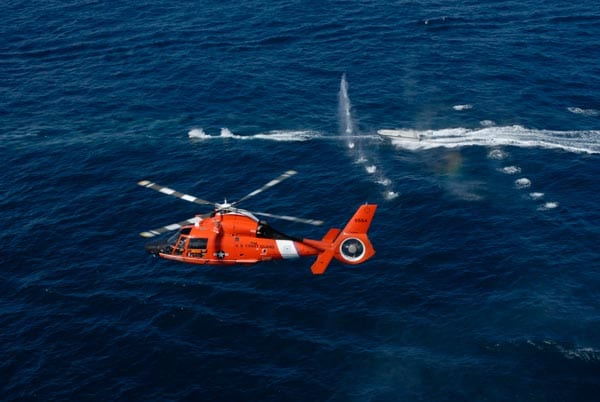 Firing warning shots at training boat from Helicopter with a M240 (all in a days work for these Coasties).

A parallel can be drawn with the go-fasts of today only now, the basic concept for catching them, the Airborne Use of Force (AUF) model developed by the USCG, is to stop or disable the go-fast and leave it dead in the water allowing a companion cutter to catch up and seize the vessel. For this, the helicopter gunner (aviation precision marksman or PM-A) would fire a burst of automatic small arms across the bow of the alleged smuggler. If that didn’t cause them to stop, the gunner would switch to a precision rifle to put rounds not into the smugglers themselves but into the engines of the craft. 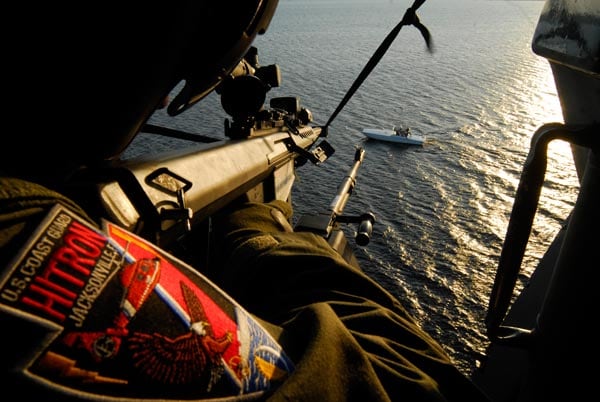 Barrett in action from HITRON helicopter.

In 1999 six pilots and four newly minted aviation gunners were brought together to proof the concept. Armed with standard M16A2 rifles for warning shots and a Robar 50 long-range heavy rifle for disabling fire, they took to the air in a leased Hughes helicopter. During this early phase, the group encountered five go-fasts and stopped all five with disabling fire. They arrested 17 smugglers—none of whom were injured thanks to the accurate fire of the Coasties.  After this test, the Coast Guard gave the go ahead to move forward with a full-scale squadron sized unit.

Today more than 200 USCG personnel are currently assigned to HITRON, based at Cecil Field Hangar 13 in Jacksonville, Florida. From there, helicopters and crews are deployed to wherever they are needed most.

Weapons of the HITRON

When taking to the air today, the USCG aviation gunner brings three firearms with them. 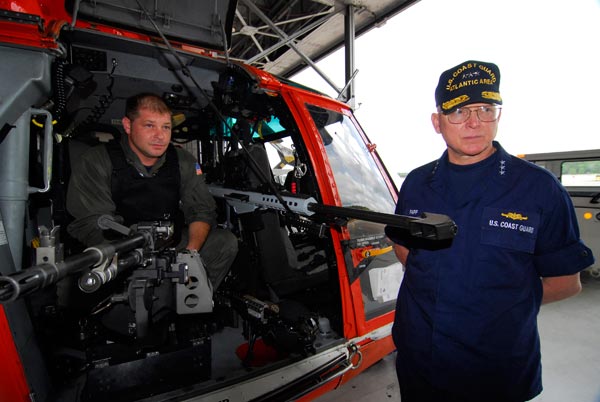 HITRON gunner shows off the tools of the trade. 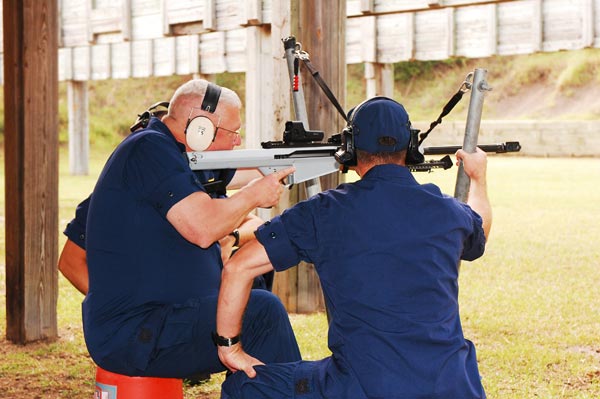 For warning shots across the bow of a TOI (target of interest), the USCG uses the standard pintel mounted doorgun of most US military helicopters—the FN M240G. The 240-Golf is a modern version of the FN MAG general-purpose machine gun used by dozens of NATO forces around the world. With three variable gas settings that range from 650-950 rounds per minute, the 240 can stitch a ten round burst in front of a go-fast in about a 0.75 seconds. Should this not persuade them to stop, the gunner can be cleared to go next-level.

The precision heavy hitter of the aviation gunner today is the Barrett M107A1 .50-caliber heavy rifle. Braced against the doorframe and the strap of the rescue hoist, the 28-pound Barrett can be balanced in a way 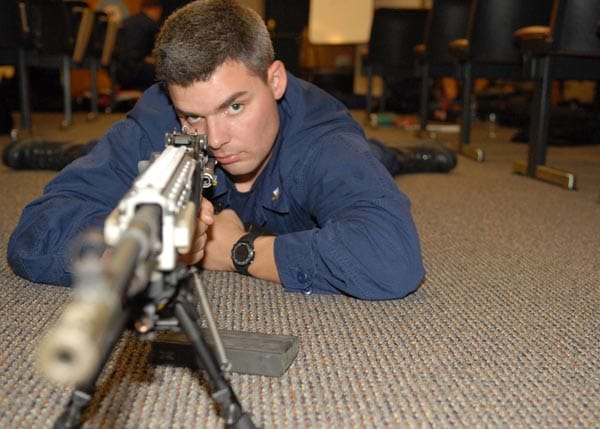 that’s familiar to any rifleman using a standard sling just on a much larger scale, providing a surprisingly stable platform from which to shoot. Using either a special version of the Schmidt and Bender 1.1-4 X 20MM short dot CQB 1/2 MOA scope or a Eotec 512 reflex sight for optics, the gunners train to hit a 16×16 inch target—roughly the engine block of a large seagoing outboard motor. While this type of shot is not hard when you are at the range, the HITRON gunners have to make these from a vibrating moving platform at another vibrating moving platform bouncing around on the thoroughly unpredictable ocean below. When you further take into account that this ‘light fifty’ is spec’d out to have a MOA of 3-inches, it’s enough said as to the marksmanship of these shooters. 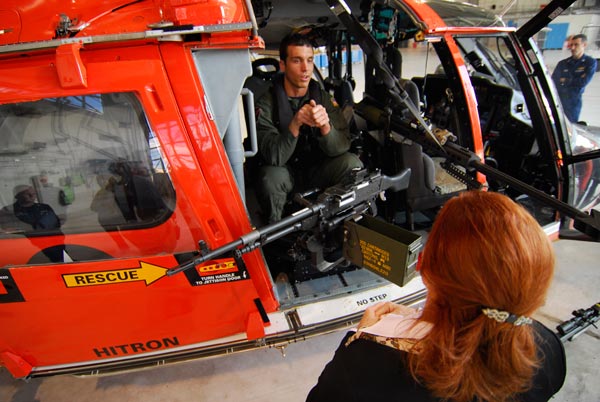 HITRON gunner. The sling hoist can be used to great effect as a stabilizer strap.

Once the go-fast has stopped, the gunner switches to an EBRM14 to provide airborne overwatch while a cutter races to the scene. This is the Enhanced Battle Rifle update of the 1960s era M14 rifle in 7.62x51mm NATO. The 175-grain M118 Long Range load it fires, delivers more than 400% greater foot-pounds of energy than the standard 62-grain, 5.56 mm round at extended ranges. With its 20-round magazine and 500-meter plus range, it gives the gunner a reliable anti-personnel rifle if the smugglers decide to shoot it out with the boarding teams.

These gunners have fired literally thousands of rounds in interdictions over the past 14 years, stopping no less than 215 vessels. Some figures estimate that this one unit has accounted for more than 10% of all drugs seized coming into the US since their introduction. In terms of cash, this is over $10-billion with a ‘B’ worth of drugs, mainly cocaine.