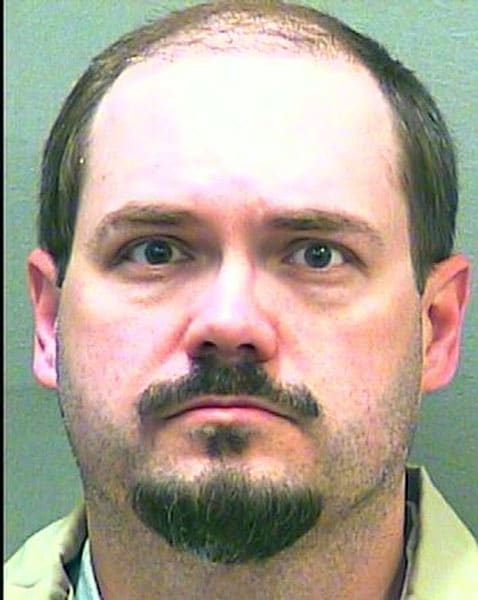 Dustin Reininger, a Texas man who was arrested in 2009 in New Jersey while transporting 21 firearms in his car during a move from Maine, was told in an appeals court on Monday that he would remain in prison. The story has made headlines again and has many gun rights advocates upset at the court’s decision to keep Reininger in prison over a seemingly simple incident of merely moving from one state to another. But is there more to this story than what’s being told?

The incident happened in the early morning hours of March 20, 2009, when Reininger was moving from Maine to Texas. According to a website raising money and awareness of his situation, he had become sleepy while driving and decided, for his safety and the safety of other motorists, that he should pull off the road and sleep a few hours before continuing his journey. He pulled into a well-lit parking lot of a Wachovia bank in Readington Township, New Jersey, locked the doors, settled under a blanket in the front seat and dozed off.

The bank was conveniently located next to a gas station, where he could fill up the next morning before continuing his drive. According to a website, he considered both bank and church parking lots to be a safe place to park and sleep briefly while traveling, rather than spending $150 or more for a hotel room.

Just before 3:30 a.m. a police officer was patrolling the area when he noticed Reininger’s SUV in the parking lot of the bank. Seeing how it was not during business hours and the bank is not public property, the officer found the parked vehicle to be suspicious and pulled in to check it out.

The officer approached the vehicle and woke Reininger. And that’s when the story becomes confusing.

Reininger, along with his lawyer, Attorney Evan Nappen, claim that the officer unlawfully searched his vehicle, which led to the discovery of a total of 21 firearms: 14 rifles, four shotguns and three handguns, as well as ammunition and magazines. They also claim that he acted legally in transporting the firearms. Nappen reiterated on Monday, “He was in transit and all the guns were lawfully his. So you have a situation where he is, in effect, turned into a criminal by New Jersey’s gun laws.”

While Reininger did lawfully own the guns, the manner in which he was transporting them and the manner in which he responded to the officer’s original inquiries are the issues that ultimately led to him being arrested and imprisoned, authorities claim. And though there’s no argument from Guns.com or other gun rights advocates that New Jersey has some strict, debatably unconstitutional gun laws, there are significant details about the incident that have not been published as readily as the story of him simply making the mistake of driving through New Jersey with guns in his car.

Reininger informed the officer than he was in the process of moving from Maine to Texas, explained that he had stopped off to sleep and also revealed that he had previously been a police officer in Maine. He did not produce any sort of identification card or other means of proving that he was, in fact, a former police officer.

According to court documents, the officer also observed that, although Reininger seemed tired, he also appeared nervous, had trouble maintaining eye contact and would stall and stutter when asked basic questions. He also had difficulty retrieving the vehicle’s registration and proof of insurance. In addition, the officer noticed a Texas license plate on the floor in the front of the car, different from the plates that were on the car. When asked about the plates, Reininger stated that the plates currently on the vehicle were expired and that he had difficulty installing the new plates.

It wasn’t until after the officer returned and asked Reininger if he had any guns in the car for a third time, mentioning that there was, “A case in there that looks very, very similar to what I have in my house for my long arm” that Reininger finally admitted there were, in fact, firearms in the car. Only, he stated that there were only three shotguns and an AR-15 in the car, not the entire 21-gun collection that was discovered. At that point he was ordered out of the car and patted down, again, for the safety of the officers.

The officer also asked Reininger if, other than the long arms which he admitted to having, there were any handguns in the car. Even though he had already told the officer that he was the one who packed the car, when asked about handguns, Reininger replied with a simple, “Not sure.” 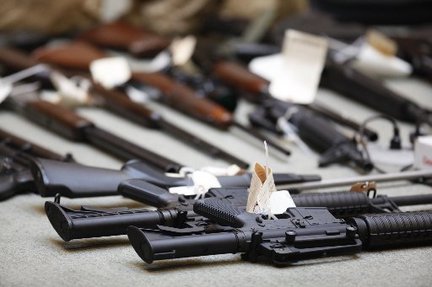 Although he did not consent to a search of his vehicle, the officer pulled the two firearms cases out of the back seat to ensure that they were properly secured, an action that has been argued as illegal, but ultimately found by a jury to be legitimate for safety reasons.  While doing this, Reininger revealed to another officer that there were “about 12” firearms in the car, including a Glock handgun loaded with hollowpoints behind the seat.

At that point, Reininger was arrested for hindering his own apprehension. In other words, he lied about the firearms in the car.

The vehicle was towed, a search warrant issued, and subsequent search resulted in the discovery of a total of 21 firearms, ammunition and “high-capacity” magazines, which in the state of New Jersey is defined by holding more than 15 rounds.

While the possession of the AR-15 style rifles, high-capacity magazines and hollow point bullets are illegal in the state of New Jersey, the federal law allows for transporting these items through the state, under U.S.C.A §926A, provided “during such transportation the firearm is unloaded, and neither the firearm nor any ammunition being transported is readily accessible or is directly accessible from the passenger compartment of such transporting vehicle.” Clearly, this was not the case, as some of the firearms were in the back seat and readily accessible to Reininger, as was the Glock tucked behind the driver’s seat. And since the hollow points were actually in the Glock’s magazine, not secured in an ammo box, his possession of hollow points was also illegal.

Following his arrest, Reininger spent four days in the Hunterdon County Jail, then was released on bail. However, when he was due in court five months later, he failed to appear, and his lawyer did not know where he was or why he did not show. Court proceeded without him and he was convicted of five charges and acquitted of the two more serious charges. A warrant was then issued for his arrest and his $100,000 bail was forfeited and revoked. According to NJ.com, he then disappeared for several days with his child, eventually turning himself in and offering no excuse for not attending the trial. 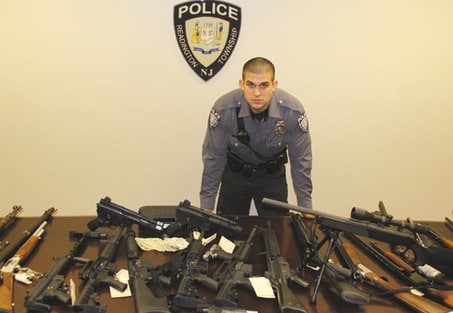 Reininger is now serving a five-year sentence, with a three-year minimum before he is eligible for parole in June 2014. He apparently was also arrested in 2008 for criminal threatening with a dangerous weapon, in which his ex-wife alleged that he threatened her at gunpoint. The charges were eventually dropped, but both of Reininger’s ex-wives have made claims that he was abusive.