They say, “Behind every great man stands a great woman.” Well, that’s certainly the case with Taya Kyle, the wife of famed Navy SEAL sniper and gun enthusiast Chris Kyle.

As many of you know, Chris was fatally shot at a Texas gun range in February. Following that tragic, life-changing event, Taya gave one of the most heart-rending eulogies that I’ve ever witnessed. In that speech, she said of her beloved husband, “Legends never die. Chris Kyle is not gone. He’s not gone. He’s everywhere. The fabric of the freedom of this nation.”

Guns.com had the privilege of speaking to Taya Kyle this Memorial Day weekend. Below is our conversation:

Blannelberry: To start, I think we all want to know how you’re doing and how you’re family is doing in the wake of Chris’s passing?

Taya: We struggle, but all things considered we’re doing as well as we could be doing. We definitely have a strong foundation and strong faith and that truly makes a difference. 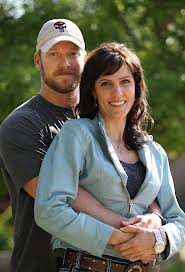 Blannelberry: A big part of Chris’s mission in life was serving those who served us. Can you talk about what helping our veterans meant to him?

Taya: It was part of Chris’s nature to help others. It’s who he was from the time that he was young. And he’s always had a deep and profound respect for the military and the men and women who serve in the Armed Forces.

He’s always been a patriot. So, when he saw fellow patriots suffering and enduring hardship, he felt compelled to protect them and care for them. In the long run, he hoped that his efforts might lead others to follow suit and serve those who served us.

Blannelberry: The war affects a whole family, not just the man or woman in uniform. What advice or insight do you have for families dealing with returning veterans?

Taya: I’m not an expert on the subject, I want to be clear about that, but I do know what worked for us: patience. Because it was a process. So you have to have faith in the relationship, trust it and foster it while being as patient as you can be.

My other advice would be to take people up on their offers for help and if you’re married, make sure you get some one-on-one time with your spouse, get a babysitter, it doesn’t have to be a big deal or a fancy dinner, but get some time outside of home with your husband or wife.

Blannelberry: You spoke at the NRA-ILA Leadership Forum, an event at the 2013 NRA Annual Meetings in Houston, Texas, what was that like and what are your thoughts about the political debate over gun control?

Taya: Well, what I learned is that I think we have to careful about what the media is feeding us on this issue. The media has a tendency to over-dramatize certain tragic but very rare events. It skews our perception. The truth is humans have been committing evil against each other from day one. The reality also is that guns are used to protect and save lives every day. They are also used to put organic food on our tables every day. It’s just not reported.

But that’s true with all the conversations we’re having in this country, on any subject, we need to make sure we’re looking at the bigger picture.

Blannelberry: Actor Bradley Cooper and Director Steven Spielberg are making a film about Chris’s life, how do you feel about that?

Taya: I feel a little bit intimidated by it, but I couldn’t ask for a better group of people to work with. They’re determined to get it right and they care very deeply about our veterans and they have a soft heart for Chris and our family. They’ve shown me that already.

Bradley is insistent in supporting veterans. And he seems very genuine about that. As is Steven Spielberg. It’ll be an interesting process for sure. But like I said, I couldn’t ask for a better group to work with.

Blannelberry: I read “American Sniper” but have yet to get my hands on “American Gun: A History of the US in Ten Firearms” which comes out on June 4, what should I expect from the book and what do you hope the reader takes away from the book?

Taya: Well, it’s a different book than American Sniper in that Chris is telling other people’s stories and not his own, so some of the more colorful language (the expletives) that Chris used in “American Sniper” is absent because he’s narrating history and not his own war experiences. Having said that, it still feels like Chris sitting on a bar stool next to you reminiscing about history and the men and women who used iconic guns in history-changing moments.

My hope is that history buffs, people who appreciate guns and generally people who just like good stories will enjoy this book. Chris was really excited about it.

To give one an example, here is Chris’s retelling of the Battle of San Jacinto (pg. 27):

But Houston was just biding his time, looking for an opening to turn around and strike. The deeper Santa Anna marched into Texas, the more worn out his troops and equipment got. Camped near the meeting of the San Jacinto River and the Buffalo Bayou, Santa Anna decided it was time for a siesta on the afternoon of April 21, 1836. He forgot to post sentries. His men lay snoozing as a burly, mangy looking Sam Houston and his more than eight hundred Texans and their allies snuck up through the cover of a forested hill, led by a contingent of uniformed Kentucky riflemen. “Now hold your fire, men,” Houston cautioned, “until you get the order!”

It was time for payback, Texas-style.

Screaming “Remember the Alamo!” and “Remember the Goliad!” the Texans overwhelmed the Mexicans in a mere eighteen minutes, enough time for Sam Houston to lose two horses–both shot out from under him–and sustain a bad gunshot wound to the ankle.

The Texans were in no mood for mercy and unleashed a full-scale slaughter.

For more information on the book and how to order it, click here.

I’d personally like to thank Taya for taking the time to speak with Guns.com. Like Chris, who I’d met in the past, she’s every bit the person you’d imagine her to be: strong, smart, down-to-earth, humble, kind — essentially you run out of adjectives to describe her. She’s a true patriot and I’m grateful to have had the chance to speak with her.

I will continue to keep the Kyle family in my thoughts and prayers as well as all those who serve this country. I hope you’ll join me in doing the same.