Lawmakers in the Bayou State are making strides to protect the Second Amendment rights of law-abiding citizens, approving a bill last week that would allow the state to issue lifetime concealed carry permits and passing a bill on Tuesday that would allow off-duty police officers to carry their firearms on school campuses.

A third bill, one that would penalize journalists, bloggers or media outlets for publishing the names of concealed carry permits may also gain approval, pending a last-minute review by a conference committee.

Prior to the passage of House Bill 265, Louisiana gun owners who wanted to carry a firearm for self-defense outside the home had to renew their concealed carry permit every five years and pay a fee of $125.  Now, though, assuming Gov. Bobby Jindal signs HB 265 into law, gun owners can purchase a lifetime CCW permit for $500 provided they agree to undergo firearm training and education classes every five years.

As for the off-duty cops being allowed to carry their firearms on school campuses or as it’s known by the Legislature: House Bill 6 that initially hit a snag over some unspecified language, which was eventually sorted out when the Senate added an amendment to specify exactly who off-duty “law enforcement officer” referred to.

House Bill 8, the bill that would criminalize the publication of concealed carry permit holder information, states:

(1) An employee of Dept. of Public Safety & Corrections or any law enforcement officer who intentionally disseminates for publication information contained in an application for a concealed handgun permit shall be fined not more than $500, imprisoned for not more than six months, or both.

(2) Any other person who releases, disseminates, or makes public the confidential information shall be fined $10,000 and may be imprisoned for not more than six months, or both.

Currently, the conference committee is reviewing two amendments proposed by the Senate because the sponsor of the bill, John Schroder (R-Covington) rejected the suggested changes.  One amendment would grant an exemption if a court was to order the release of CCW permit holder information and the other amendment would grant another exemption if the concealed handgun permit holder was charged with a felony offense involving the use of a handgun. 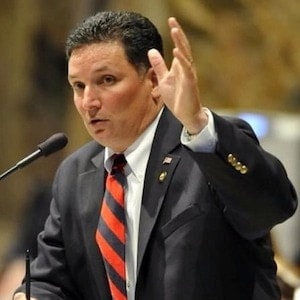 It’s unclear as of right now whether the committee will approve the amendments and kick the bill back over to the Legislature for another vote or whether they will allow the bill to proceed as is.  Either way, the bill was overwhelmingly popular in both chambers, initially passing by a margin of 76-18 in the House and 33-2 in the Senate (with the amendments), so it’s difficult to imagine any changes being made.

House Bill 8 was conceived in the wake of the Journal News controversy, when the New York-based newspaper published the names and addresses of local gun owners in surrounding areas on interactive maps following the mass shooting at Sandy Hook Elementary in Newtown, Connecticut.

While several states — including New York — have subsequently passed laws prohibiting the release of CCW permit holder information, arguably none have gone so far as to criminalize it to the extent that Louisiana is in House Bill 8, which has some critics of the bill crying foul.

“I find it very ironic that the very people who screamed the loudest about attempts to limit their Second Amendment rights are here eager to limit my First Amendment rights,” The Advocate Executive Carl Redman exclaimed at an early May Senate committee hearing.

What are your thoughts?  Does HB 8 go too far?  Does it violate a journalist’s First Amendment rights?

Also, what do you think about the direction Louisiana is headed in?  Do you support lifetime CCW permits and off-duty cops carrying on school campuses?