According to police, a fast food employee foiled a robbery at Burger King with his quick thinking.

Located in Stockton, CA, the burger joint was stormed by two armed gunman brandishing firearms and demanding cash. In the melee an employee snuck out a back door and discovered the thieves idling car. 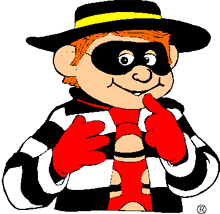 Surprisingly, not one of the suspects.

The employee hopped in and took off, stashing the car around the block in order to prevent the robbers from fleeing.

“I haven’t heard of any employee actually leaving a business, getting inside the suspect vehicle and trying to hide it,” Stockton officer Joe Silva told reporters.

When the thieves realized their car had been taken, they took off on foot and attempted to hide in a nearby field – but to no avail. Police soon found the suspects and charged Gabriel Gonzalez and Jeremy Lovitt with armed robbery.