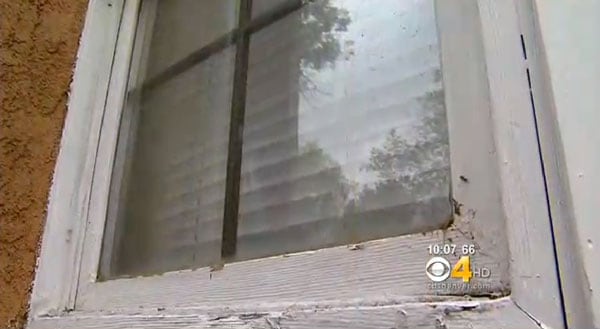 The bedroom window where the intruder started to climb in. (Photo credit: CBS, Denver)

A woman in Colorado Springs armed with a handgun scared away an intruder when he tried to climb through her bedroom window earlier this week.

It was just before 3 o’clock Sunday morning when Diana Richter heard someone removing the screen from her window. “It was a very beautiful night and I had my windows open,” she told CBS, Denver. When she heard the noise, she quickly grabbed her .380, while warning the would-be intruder to go away. “I don’t know who you are, but I’ll shoot you,” she shouted, but her warning went unheeded.

As she saw the man’s Nike-sporting foot coming through the window, she fired at him. He initially hid behind a tree, but once Richter hit the tree he was hiding behind with one of the five shots she fired, he took off running down the street. 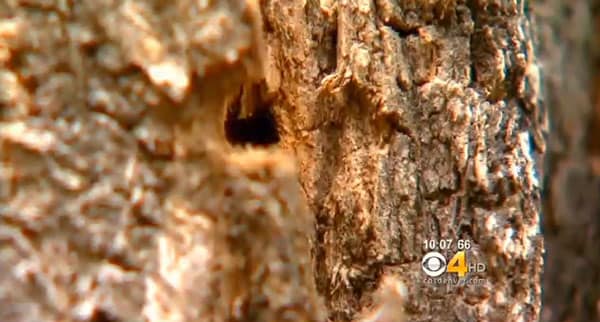 The tree where the intruder hid and Richter hit with one of the shots she fired. (Photo credit: CBS, Denver)

While the would-be intruder was not struck by any of the bullets, Richter states that looking back she knows that she would not have been protected by the “Make My Day Law” of Colorado, (which, yes, is a reference to the words uttered by Dirty Harry) because the man was not in her home when she fired the shots.

Richter would later state that at 3 in the morning with someone trying to break into her home with unknown intentions, the law was the furthest thing from her mind. She was only thinking about doing whatever had to be done in order to protect herself and following the incident, Richter has had a security system installed in her home.

Police searched for the man for several hours with a K-9 unit, but the intruder was never found. He was not believed to be injured either.