President Obama’s gun control express is quickly losing steam, at least according to a new poll conducted by Reason-Rupe which found that approximately two-thirds of Americans want the Senate to drop the gun control debate and “move on to other issues.”

The Reason-Rupe national poll surveyed 1,003 adults nationwide on mobile (503) and landline (500) phones and found that only 33 percent of respondents believed that the “Senate should debate and vote on gun control legislation again,” while the majority, 62 percent, would like the Senate to “move on to other issues.” 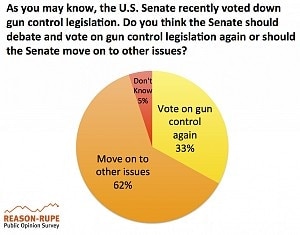 As for how the numbers breakdown across party lines, unsurprisingly a greater percentage of Republicans, 83 percent, favored “moving on” than compared with Democrats, 30 percent, wanting to “move on to other issues” and 51 percent wanting “to debate and vote again.”  A majority of independents, 66 percent, also wanted the Senate to take up other issues.

Since the mass shooting at Sandy Hook Elementary in Newtown, Connecticut,  there have been a number of different polls that have concluded a number of different things about Obama’s push (in conjunction with several key senators: Feinstein, Reid, Schumer, Manchin, Toomey, Lautenberg) to reform the the nation’s gun laws.

Several polls, Washington Post/ABC and Gallup, have found public support for Obama’s centerpiece proposal, an expanded background check agreement that would cover gun shows and Internet purchases, to be around 85 percent.

Additionally, in April, when several of the major gun control measures failed to clear the Senate, including the Manchin-Toomey expanded background check amendment, a Pew poll that examined voters’ reactions to the bill’s defeat.

Those who were “very happy” that the bill died in the Senate outnumbered those who were “angry” by a margin of 5 percentage points illustrating that when it comes down to it, pro-gunners have a more intense and more politically engaged base than the gun control community.

So, what can gun owners take away from all this polling data?

Well, it appears the support for gun control at the federal level is waning.  One can argue that this is primarily because the emotional tide associated with the Sandy Hook tragedy, which galvanized the pro-gun control community, the Obama administration and those aforementioned senators into action, has significantly receded.

Moreover, one can argue that in the face of a recent DOJ report that showed a 39 percent decline in firearm-related homicides and a 69 percent decline in nonfatal firearm crimes (aggravated assault, robbery and sex crimes) between 1993-2011, it’s hard for the White House or pro-gun control senators to build a convincing case for tougher federal restrictions on gun ownership.

Does this mean that the battle for gun control is over?

Of course not.  Though, for now, at least at the federal level, it’s possible that the Senate moves on, especially given that Obama’s clout and political cache has been damaged following a slew of scandals: the Benghazi mess, the DOJ recording journalists’s phone calls, the IRS targeting conservative groups and the fatally flawed Operation Fast and Furious.

At the state level, however, the battle is still in full swing.  New York, Connecticut, Maryland and Colorado have all passed sweeping gun control bills post Newtown.  There’s little reason to believe that other states — California, Illinois, Massachusetts, etc. — who are actively debating the issue right now, won’t follow suit.