The German army’s acquisition of the HK G36 has sparked an investigation by the German government into Heckler & Koch, Ministry of Defense employees and Bundeswehr (the unified forces of Germany) on charges of corruption.  According to documents obtained by the government, the armed forces procured these military rifles despite several independent defense technology studies that identified serious problems with the design, including but not limited to poor accuracy.

Individuals facing these allegations include authorities in the rifles’ procurement, employees at the Ministry of Defense and defense contractors like HK and even a judge, though prosecutors have refused press requests for further information.  As to the specific charges, these are also unknown at this time, though bribery, and fraud come to mind.

Likewise, HK, universally recognized as one of the highest quality gunmakers in the world, has been no stranger to controversy or litigation in the past couple of years as Guns.com has reported on.  From raids by German officials to the bribery of foreign officials to plots by eco-terrorists to encase their Oberndorf factory in concrete, HK’s reputation for high quality merchandise is only eclipsed by their businesses ability to weather sh*t storms.

Indeed, the Heckler & Koch recently admitted to illegally selling over 9,000 of the very same G36 rifles to Mexico between 2005-2010, which they continue to produce.

Though a definitive list of issues affecting these rifles is lacking at this time, poor accuracy has been singled out as the centerpiece — a problem soldiers in the field have been reporting since at least 2012.  The German newspaper Die Welt published accounts by soldiers on April 27 that stated once the weapon heats up from sustained firing, accuracy out to 200 meters becomes nonexistent.

Life threatening design flaws like this only hint at larger, tragic stories sitting just under the surface of this legal proceeding considering that German forces have been fighting with these guns in the Middle East for the past decade.  It could also mean the corruption charges may eventually take a back seat to something resembling criminal negligence though this is speculation. 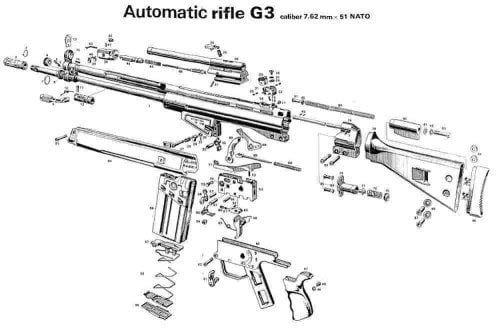 The G38 was first accepted into service back in 1997 as a 5.56×45mm replacement for the 7.62mm G3 battle rifle under the designation Gewehr G36, but tracing the weapon back to its early development in the 1970s reveals a fairly reluctant start to this gun’s service life.

The gas-operated select fire design that feeds from a 30-round detachable box magazine or 100-round C-Mag drum magazine was originally shelved in favor of the export friendly HK33 and G41 rifles as well as the innovative G11 which could shoot caseless ammunition and was set to replace the G3.  The G36 service rifle design was only dusted off after the unification of West and East Germany, when budget issues forced a halt to production of the G11.

Thought not the first, the G36 became one of the first and definitely one of the most popular service rifles to extensively use polymers in its design and found a home in the arsenals of police and military forces around the world (and aped repeatedly by airsoft makers). Featuring a no tool disassembly and options for things like rifle grenades and flash suppressors, the Spanish Armed forces adopted the rifle and it was eventually licensed for production in Saudi Arabia. Sporting versions are also still sold as the semi-automatic SL8 and the bolt action R8. We’re guessing those don’t have the same overheating problems.

As to what the German army will use for their select fire fun in the meantime, they still have the G28 and the HK417, also by Heckler & Koch, though soldiers have also reported accuracy problems with the latter…

Editor’s note: if you have any information on this developing story or G38 accuracy issues please contact Guns.com.