Scarborough Clashes with New Republic Editors over Demise of NRA

The New Republic’s Alec MacGillis and Franklin Foer were guests on “Morning Joe” this Tuesday to discuss their new cover story about the NRA.

Claiming the National Rifle Association was “going down” and that their perceived power was simply that – perceived, rather than real, the editors tried, but ultimately failed to convince Joe Scarborough.

“You just did this so liberals could pick up this magazine and hug it,” Scarborough quipped. “They’re not going down.” 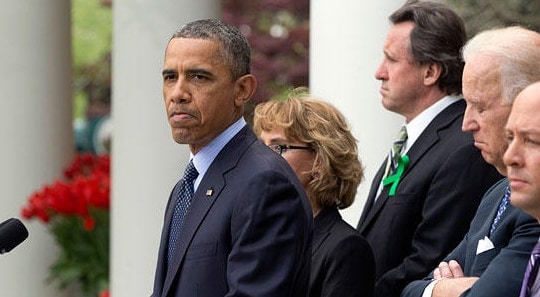 Obama addresses the press after the Senate failed to pass the Manchin and Toomey Gun Control Bill last month.

The piece contends that the for many years, the NRA has had no real political opposition. But then came Newtown. Claiming the Connecticut school shooting rampage “changed everything,”

Foer continued the assault on the NRA’s perceived power, alleging it was never rooted in large sums of money or adroit lobbying. Rather, it was based on “a perception that you mess with the NRA, you’re going to pay a terrible political prince. To be sure, there is a graveyard filled with the political careers of many, many politicians.”

Ultimately the NRA’s “biggest problem right now,” said MacGillis, “is that they have no vulnerable Republicans who voted against this bill. Ayotte and all these other senators are not up [for election] for a couple of years, so the big test case is going to be the Democrats who voted against the bill.”

You can read the entire The New Republic article here.