According to a controversial new book, American WWII GIs quickly morphed from welcomed liberators to sex-crazed rapists who were feared as much as the Germans. 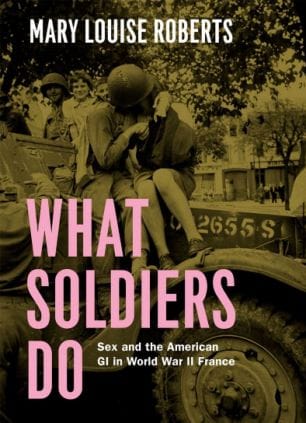 Professor Mary Louise Roberts, from the University of Wisconsin, said within months of D-Day, French women came to fear their so-called “liberators.” In her book “What Soldiers Do,” Roberts claims by the summer of 1944 large numbers of women in Normandy said they were raped by American soldiers.

Furthermore, the American arrival in France sparked a crime wave that ranged from robberies to petty thefts. But sex, consensual or forced, was rampant on the streets of France.

“My book seeks to debunk an old myth about the GI, thought of as a manly creature that always behaved well. The GIs were having sex anywhere and everywhere,” Roberts said. “Women, including those who were married, were openly solicited for sex. Parks, bombed-out buildings, cemeteries and railway tracks were carnal venues. People could not go out for a walk without seeing somebody having sex.”

Pierre Voisin, mayor of the city of Le Havre, even complained to Col. Thomas Weed — commander of US.. troops in the region. Voisin suggested Americans set up brothels outside the city to satiate the sex-obsessed soldiers and reduce the spread of STDs.

Among claims of sexual debauchery, Roberts also asserts the U.S. Army “demonstrated a deep and abiding racism,” pinning the majority of rapes on black soldiers. She cites documents that indicate 152 troops were discharged for rape, 130 of them black. The professor pointed out that The Stars and Stripes taught soldiers French phrases like “you have charming eyes,” “I am not married,” and “are your parents home?”

“American propaganda did not sell the war to soldiers as a struggle for freedom but as a sexual adventure,” concluded Roberts.