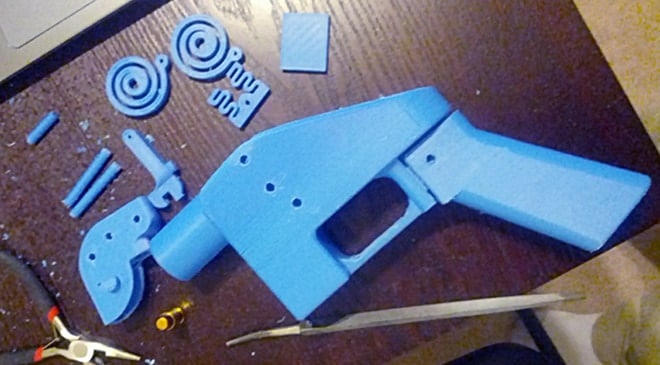 The Liberator, one of the first completely 3D-printable centerfire handguns, has been given an overhaul, updates to make it more compatible with a wider array of 3D printers.

The almost completely-plastic pistol was teased for weeks then unveiled earlier this month. Shortly afterwords, the U.S. government shut the project down for reasons of national security. The Internet being what it is, naturally the plans went viral, with the originals easily- and widely-available.

However, some 3D printing enthusiasts found problems with the plans. Part that would not fit, scaling issues, parts that would crash 3D printer computers.

Some of this is because the original plans were developed for a Stratasys SST, a commercial-grade 3D printer used by Defense Distributed, the organization behind the Wiki Weapon project and the Liberator. Most 3D printers used by hobbyists are less expensive and use different blueprints.

While the blueprints can be exported to work with other printers, some details don’t always make the transition; people not working with a Stratasys 3D printer needed updated, corrected plans in order to make their own Liberators. It didn’t take very long: plans for the Liberator version 1.1 have been developed, although they’re not official by any means — they were put together by the community.

This isn’t a huge surprise. It’s hard to imagine any government agency capable of removing the Liberator from the Internet; once data like this is made public, even for just a short time, it’s impossible to redact, and the government knows it.

“Limiting access may be impossible,” read a bulletin posted by the Department of Homeland Security according to a Fox exclusive. The document paints a frightening picture for many.

“Magnetometers may fail to detect the Liberator, depending on device sensitivity. Though it is prohibited by federal law, manufacturers may deliberately omit the unnecessary metal insert, leaving only a small nail and ammunition as the sole metal component. Future designs could further reduce or eliminate metal entirely.

“Unqualified gun seekers may be able to acquire or manufacture their own Liberators with no background checks.”

“Proposed legislation to ban 3D printing of weapons may deter, but cannot completely prevent their production,” the memo says. “Even if the practice is prohibited by new legislation, online distribution of these digital files will be as difficult to control as any other illegally traded music, movie or software files.”

These new updated plans reflect exactly that. Featuring updates that make the Liberator more universal, version 1.1 also adds additional barrel plans for use with .25 and .45 in addition .380 ACP.

Another small but critical addition, which is sure to get the ire of security agencies and politicians alike, is the inclusion of a 3D-printable firing pin. The first design used a nail. Omitting the nail means something else entirely: that the Liberator 1.1 can be made entirely without metal, consequently being undetectable by the majority of security systems.

While it isn’t legal to make the pistol in the U.S. without some metal (or other materials that will set off a metal detector and show up on an X-ray machine), that doesn’t mean anything to someone who has no intention of complying with the law.

The 3D-printed pistol may not be the most effective firearm ever made — in fact, the ballistics are pretty bad — it represents a shift in a new direction for guns, policy and security.