A five-year-old boy was suspended from school for 10 days after school officials caught him on Wednesday with a “cowboy-style cap gun” that the kindergartner stowed inside his backpack on his way to Dowell Elementary School in Lusby, Maryland.

Following the discovery of the toy gun, school officials interrogated the boy for approximately two hours before contacting his parents.

It was during the questioning that the young boy “uncharacteristically” pissed his pants, according to the boy’s mother who spoke to the Washington Post on the condition of anonymity. 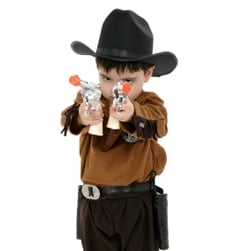 Unconfirmed reports say this reeanactment actually caused an assistant principal to shit himself.

The mother, who is a high school teacher, said that she did not take umbrage with the school’s decision to take punitory action following the incident, however, she believes that the punishment meted out does not fit the crime.

“I have no problem that he had a consequence to his behavior,” said the mother to WP.  “What I have a problem with is the severity,” she said, and the way it was handled.

This whole ordeal started around 8:30 on Wednesday morning when this young ‘outlaw’ snuck the cap gun onto his bus.  Why did he do it?

Well, it appears he wanted to one-up his buddy who had brought a water gun on the bus the day prior.  Perhaps, he was trying to say, You think that’s cool, check out this!

Following the incident, he explained to his mother that he “really, really” wanted to show his friend the toy, which seems to corroborate that theory.

At 10:50 a.m., the mother was contacted by the school’s principal, who told the mother that the boy had pretended to shoot someone on the bus with the gun.

Both the boy, and his older sister, a first grader who was also interrogated by school officials as a result of the incident, denied that allegation.

Now, the youngster faces 10 days suspension, which would preclude him from being able to participate in the end-of-the-year Kindergarten celebration and events.  Plus, if the boy’s sentence is not commuted it will go down on his permanent record.

“The school was quite obviously taking it very seriously, and he’s five years old,” said the mother, who is currently seeking clemency for the lad she claims is “all bugs and frogs and cowboys.”

Yet, she still has one big question of her own, “Why were we not immediately contacted?”  Hopefully this questioned will be answered today, at the scheduled disciplinary meeting.

Robin Ficker, the family’s attorney, intimated that were the family contacted sooner the entire incident could have been used as a “teachable moment.”

“Kids play cowboys and Indians,” he said. “They play cops and robbers. You’re talking about a little five-year-old here.”

As the Daily Caller illustrated, this is not an isolated incident.  In fact, over this academic year there have been half a dozen or so similar situations were a young student was punished for a toy gun-related incident or gesture (the boy who chewed the pop tart into a gun, the boy who made the gun hand gesture, the boy who brought a plastic Lego gun on a bus — for the full list click here).

From my perspective, this behavior is completely unacceptable.  Toy guns are not toys.  They’re implements of imaginative disaster.  And we need to crackdown on the misguided delinquents and miscreants who “play” with these destructive instruments before it’s too late.  I’ve always said this, but children are the bane of society.  To quote Pat Benatar: “Hell is for children.”

Instead of giving them the proverbially slap on the wrist for their offenses, like a 10-day suspension from school, we ought to bring back more harsh and severe forms of corporal punishment, e.g. switching or flogging, tar and feathering, water boarding, etc.