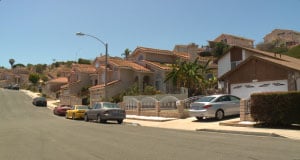 A homeowner was arrested Tuesday after he shot at three burglary suspects which he claims were preparing to break into a home in his neighborhood in Alta Vista, California. He says they also tried to run over him with their car when he went to confront them, and that’s when he shot at them, striking the front passenger.

According to a local Fox News affiliate, the homeowner, James Monroe, 57, had witnessed the trio burglarize a neighbor’s home, only to return less than an hour later looking for additional loot. When he saw the car casing the area and one of the occupants get out of the car and walk through a neighbor’s yard, he told his wife to call the police, armed himself with a 9mm handgun, and walked outside to question their presence in his neighborhood.

San Diego Police Officer Dino Delimitros said that once Monroe walked into the street, the suspects saw him, then tried to run him over with their car while attempting to flee. That’s when Monroe fired two shots into the car, one hitting the front passenger in the head.

Minutes later the three arrived at a local hospital. The man who was shot, whose name has not been released, was treated for the gunshot wound, which appears to be non-life threatening. The two girls who were with him, 18-year-old Tronicqua Yvonne Henderson and 19-year-old Javonna Renae Percy-Simpson, were both arrested. According to the San Diego Police Department, one had a felony warrant for auto theft and the other had a misdemeanor warrant. In addition, the vehicle they were in was also reported stolen.

Monroe was also arrested on suspicion of assault with a deadly weapon.

Neighbors are applauding the actions of Monroe, saying that he stopped the thieves from stealing from their homes, but the police say he should have never taken matters into his own hands.

Lt. Kevin Mayer of the San Diego Police Department says, “As with any level of force — especially deadly force — your level of actions are going to be critiqued. Taking action is not always the best solution. When you see something occurring, make sure you call us first.”

Of course, Monroe’s wife did call the police, but they were unable to respond to the call in time to stop the burglary from occurring.

Alice Lazo, Monroe’s neighbor and the would-be burglary victim, commended Monroe for his actions, saying that if it wasn’t for him she would have been a victim of theft. She disagrees with the police’s decision to arrest him and says, “It’s not right. He’s a really good person.”

It is unknown if Monroe called the police when he originally saw the three break into his neighbor’s home the first time.

He was released on bail on Wednesday morning and awaits a decision by the District Attorney on whether or not charges will be filed.

Monroe declined to talk with reporters.