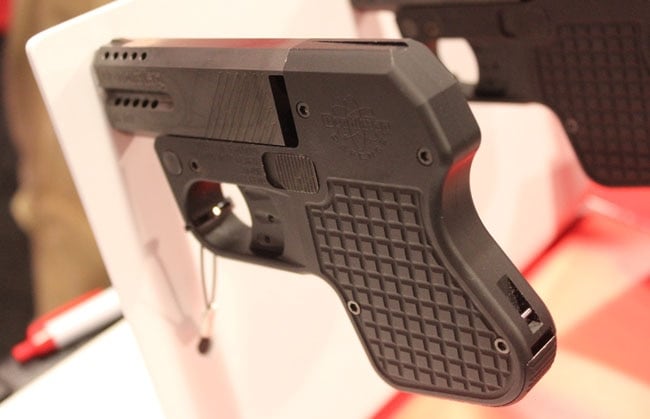 The DoubleTap Tactical Pocket Pistol on display at SHOT Show 2013.

After a little more than half a year in production with a new manufacturer, DoubleTap Defense announced yesterday that the Tactical Pocket Pistol is officially shipping. This is a big deal because this pistol has technically been in production since late 2011, at least that’s when Guns.com first reported on it, and due to a few bumps in the road the company has yet to actually churn a few out for consumers.

The patent pending design is essentially an evolved derringer. It’s about the size of a iPhone, and is uber thin and uber light at round 12 ounces. It has a double barrel and is available in either 9mm or .45 ACP, though .45 was the introductory model.

According to the press release, shipments are on their way to distributors along with promotional packages, meaning you might see a nice DoubleTap Defense display set up at your gun store and a few behind the counter.

“We have production capacity to quickly fill all orders and many anxious customers to appease,” said Raymond Kohout, inventor of the DoubleTap. He added that since the company replaced Heizer Defense with Azimuth Technologies to produce the gun, the design has actually been improved. 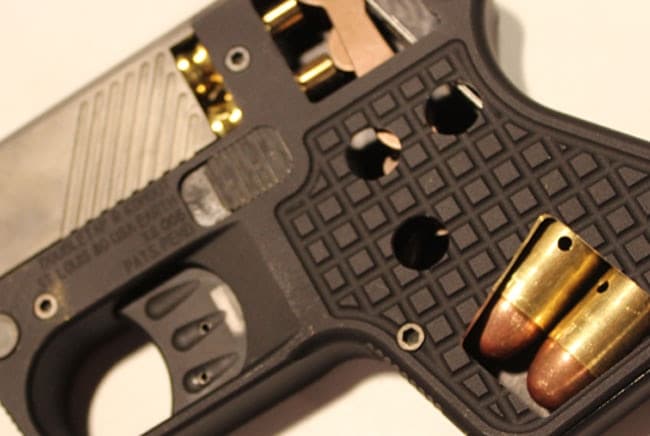 The DoubleTap Tactical Pocket Pistol with a cutaway on display at SHOT Show 2013.

The upgrades include a interchangeable barrels, so you can swap the .45 for a 9mm and vice versa, and barrels can be easily removed since it’s held on with an M16-style push pin. The pistol grip now has a “FRAG” pattern, which was inspired by the fragmentation grenade. It has an improved, easier to use thumb-latch, and a patent pending trigger system simplified to only four major components and featuring dual hammers. And the double-action, sequentially fired mechanical trigger system has double-strike capability.

Otherwise the pistol holds two rounds — one round per barrel — and there’s a compartment for two extra rounds in the grip. It operates just like a derringer in that the barrel tilts open and you just slide the rounds in.

The DoubleTap Tactical Pocket Pistol will be available with aluminum or titanium construction, and with or without a ported barrel. Base price for a standard model (aluminum, non-ported) starts at $499 and get as high as $799 (titanium, ported).