So, You Want to Buy a Flamethrower? (VIDEOS)

So, you’re telling us you’re done with cartridge-fired weapons?!? You’ve had your fill of rimfire, centerfire, shotguns, bows, and slingshots and, while nice, they have left you cold and wanting? Well, what better way to add a little renewed warmth to your shooting life than a gun that literally shoots flames? And would you believe getting your hot little hands on one may be a lot easier than you think… 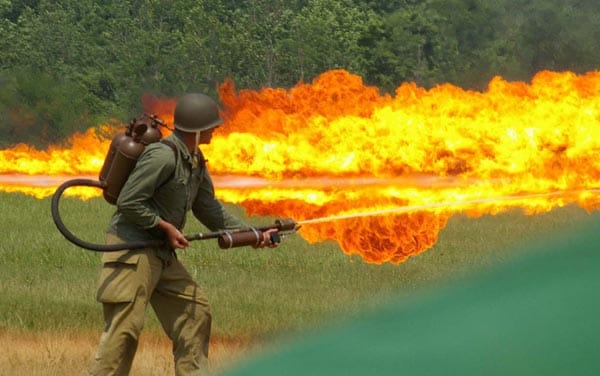 US M1 Type Flamethrower (our first effort and not our best)

Although the use of flame as a weapon probably goes back to the day after we figured out fire, the first flamethrowers as we know them today came about during World War 1.  German inventor Richard Fielder came up with a man-portable device that consisted of a 4-foot 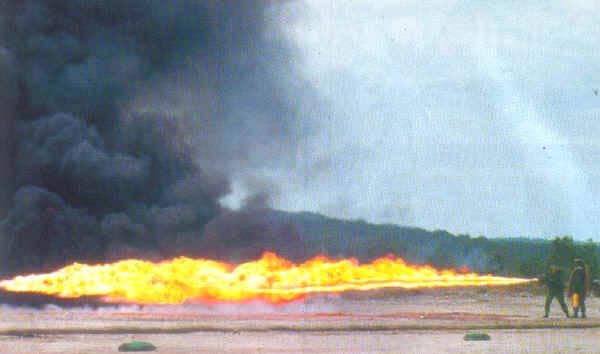 Early German flame weapons could “throw” fire out to about 21 yards.

long canister with two sections and a hose. The bottom of the canister held pressurized gas, the top held flammable thickened oil. By pressing a simple trigger, the pressurized gas flowed through the oil reservoir and into a hose that ended in a steel nozzle in which a pilot light or slow burning wick was lit.  This pilot ignited the gas as it left the hose at a high speed, sending a plume of flame out to effective combat pistol distances.

The Kleif M1912 Flammenwherfer. The weapon debuted in WWI and needed at least two soldiers to operate.

This device was called the flammenwerferapparaten (flame-thrower-apparatus) for its ability to toss sticky flame fifty feet or more.  The Kaiser Wilhelm (the Imperial German warlord who 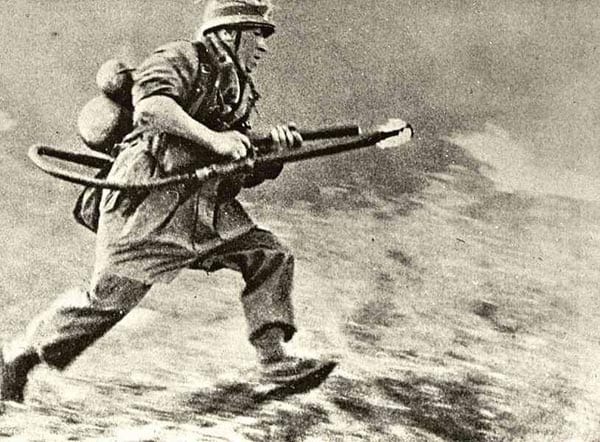 German WW2 Paratrooper in Crete, running with a Flammenwherfer

introduced chemical weapons like mustard gas to warfare) was like a kid at a parade when it was first demonstrated to him.

During World War 1, small teams of German troops moved up and down the line to use their weapons as needed. The first flamethrowers were so large that they needed two men to carry: one to tote the hose, the other the fuel. By 1917, the design had shrunk down to small enough units that a single lucky soldier got to tote into battle. Once these flame guns were encountered on the battlefield, the British and French decried their use as barbaric—then rushed out to build their own. 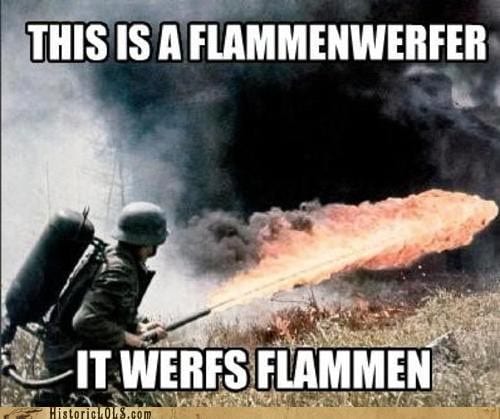 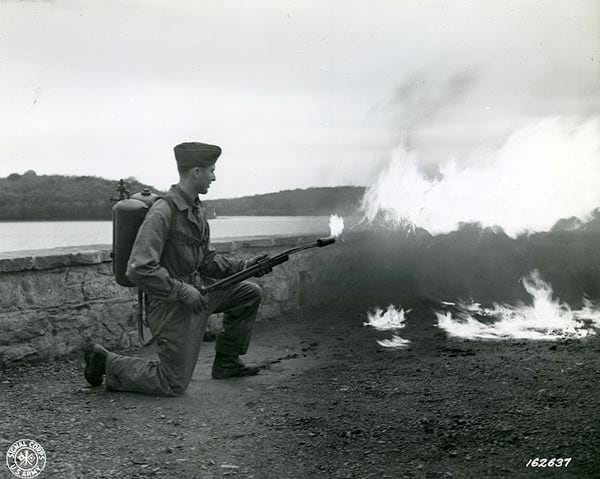 The United States only got into the flame tossing game on a large scale in World War 2. Our first effort, the E1R1 Flame thrower, was a 70-pound backpack weapon that used nitrogen gas to propel 5-gallons of diesel oil out to 15 yards. It was inefficient and only held enough fuel for about 15 seconds of fire. Furthermore, the Army only had a grand total of 12 of these weapons when the Japanese attacked Pearl Harbor. An improved version, the M1, came out in 1942 and used a thickened napalm-gas mixture that greatly increased the range, with about half of the flame reaching the inside of a Japanese pillbox at fifty yards. Some 14,000 of these were used during World War 2. 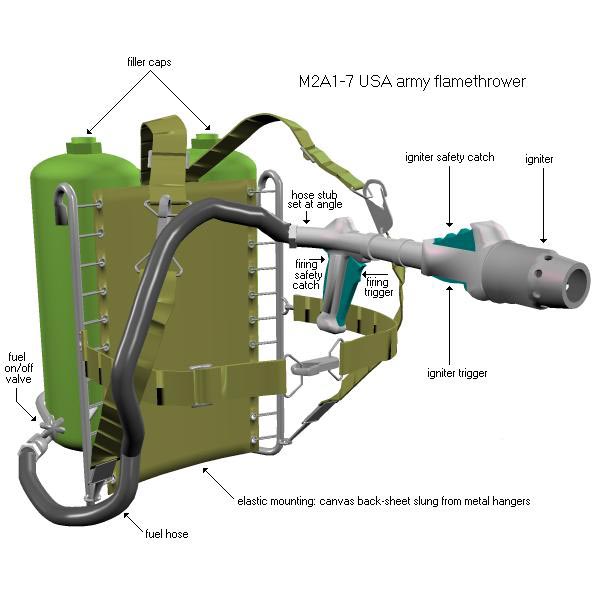 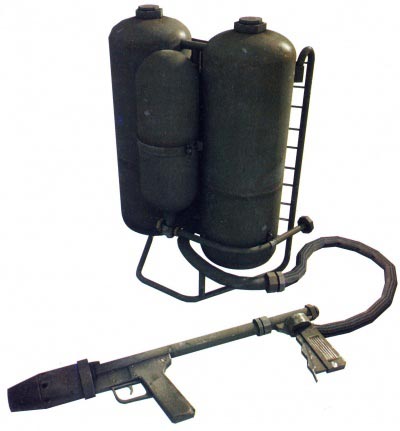 A further improvement, the M2, still weighed in at 70-pounds when loaded but could be more accurately aimed (its fire people!) and was effective out past 60-yards. Contrary to popular films, it was actually hard to kill a flamethrower operator with a hit to the tank, as the propellant gas was non-flammable and the napalm had a high ignition point.

Still, it was a hard sell to convince a 19-year old soldier or marine to tote a massive often-undependable zippo around the battlefield that had the same range as the average potato gun, rather than a M1 carbine, Garand, or submachine gun. Once they were used in combined units however, where the flamethrower-carrying grunt was supported by

long-range rifles, the weapons became pretty well liked and eventually a staple. By the end of the war, some 27,000 M2 variants joined their less reliable M1 cousins and there was a flamethrower in almost every platoon. 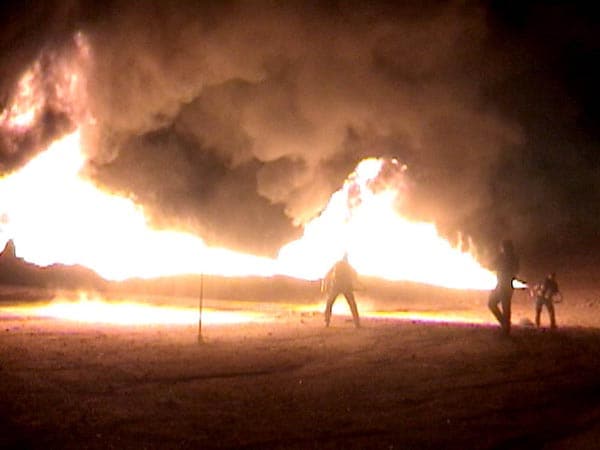 By Vietnam the standard flame cannon was the M9 and it came in at just 50-pounds. While there were still no lines forming for the privilege of carrying a napalm projector on their back, it was a lot more reliable than the flamethrowers of World War 2.

Why don’t we see these awesome weapons today?

The Protocol on Prohibitions or Restrictions on the Use of Incendiary Weapons signed in Geneva in 1980 pretty much killed the flamethrower as a weapon of war. It seems they are just too inhumane for use in war, even against Nazis or commies. Besides, the thermobaric weapons and white-phosphorous grenades of today are much better than the old napalm hose ever was. 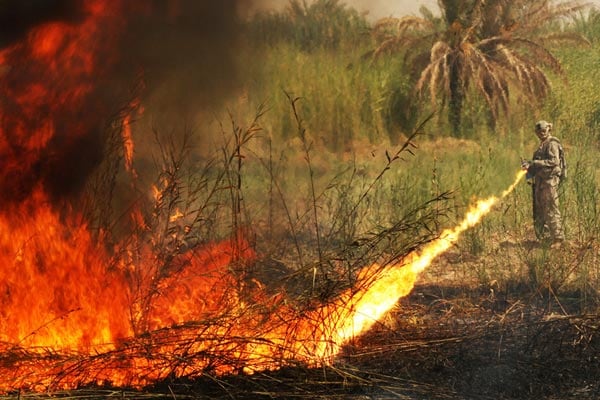 Don’t get me wrong, engineer units still have a few flame devices, but they are for non-combat use only.

But do you want to know the neatest thing about flamethrowers?  There is no federal prohibition against owning a working one. 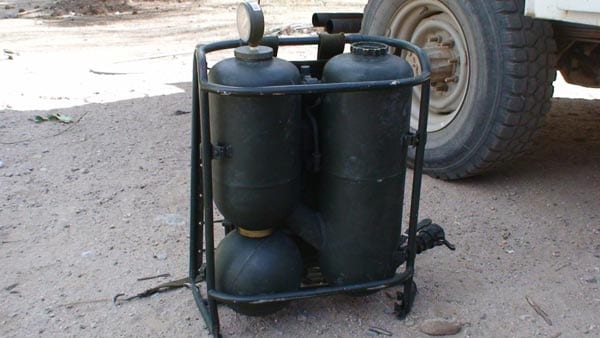 M9 Flamethrower working and for sale.

The NFA of 1934 regulates suppressors, full-auto firearms, rifle barrel length, shotgun overall length, cannons over .50-caliber etc., etc., etc. but not a word about flame weapons. It’s a non-issue with the Feds and barring state regulations any citizen can own/operate a flamethrower (note- this is not legal advice, consult your local and state laws before you acquire something that wherfs flammen!).

But now the bad news: even though some 50,000 flamethrowers were used by the US alone from 1942-1980, almost all were destroyed. Those that were sold for scrap were usually 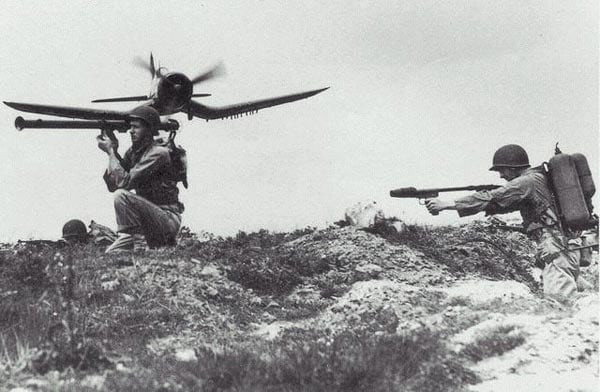 Wonder what that bazooka gunner did?

demilled by poking holes in tanks before they were passed on to that great WWII movie in the sky. There is however, a growing interest in getting these old surplus weapons back up and running. The leading expert in the country is Charles Hobson who has gotten several of these back to their natural state.

Now don’t get me wrong, sometimes they do come up for sale in great, original, working condition without having to be rebuilt, but they are a little pricey. 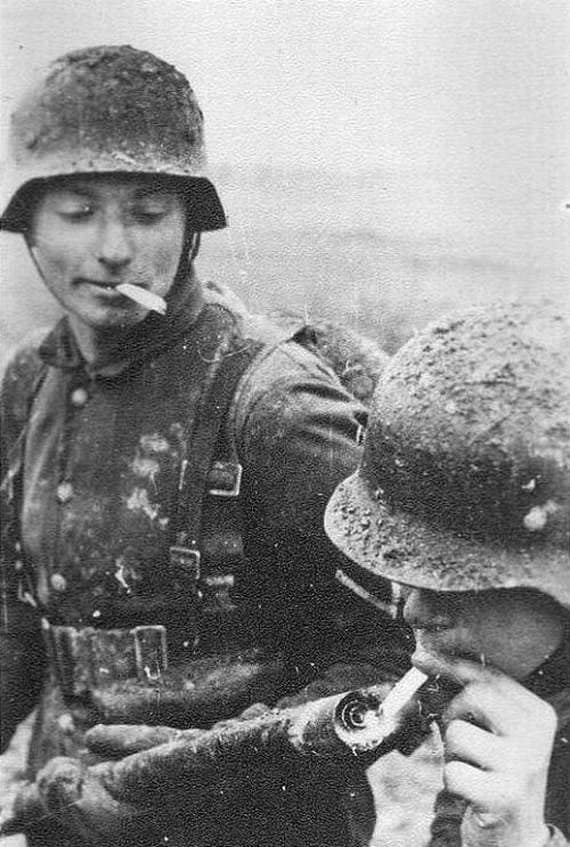 It’s also worth noting that flamethrowers use in agriculture has always been on a much larger scale than in military applications. If you just need to put a good bit of flame out but don’t want the high price of a milsurp weapon, you can turn commercial. Simple drip torches are common in wild lands firefighting and for clearing brush on farms.  These can cost as little as $150. Pressurized jet torches for use against legions of dense underbrush and weeds can be had for around $300.  Simply attach a propane tank with a vapor withdrawal cylinder and you are good to go for the next time the dandelions start talking smack.