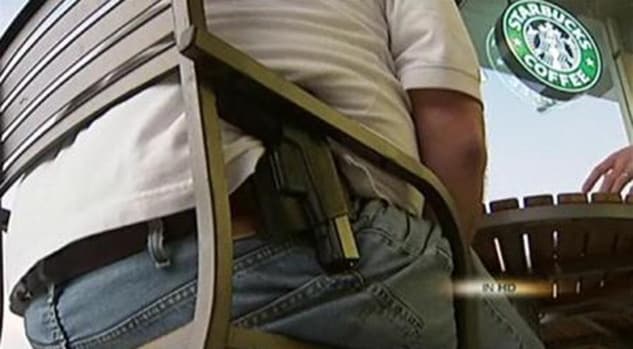 Starbucks recently announced plans to ban smoking within 25 feet of its storefronts. But in states where open carry of firearms is legal, the coffee house has refused to ban them, according to Starbucks’ policy.

“We comply with local laws and statutes in the communities we serve. Our long-standing approach to this issue remains unchanged and we abide by the laws that permit open carry in 43 U.S. states. Where these laws don’t exist, openly carrying weapons in our stores is prohibited,” the company writes on their website.

Apparently this angered Moms Demand Action for Gun Sense in America. They fail to see the logic in the company’s call that second-hand smoke is more dangerous than openly packing customers. As is common with the Mom’s over at MDAGSA, they’re starting a petition to get Starbucks to ban all guns from their stores.

“As mothers, we wonder why Starbucks is willing to put our children at risk by allowing customers to openly carry loaded weapons in its stores,” the group writes. “We are asking our members and all American moms to send a letter to Starbucks today asking them to ban guns from all of their stores, regardless of state laws on open carry.”

You can check out MDAGSA’s letter here.