The Duffel Blog: The funniest website you don't know about

The Duffel Blog!  Do you know about it?  There’s actually a good chance you do, the website’s grown exponentially since its inception in March of 2012, it now has over 51,000 Facebook friends.  But hey, if you don’t know about it, you need to check it out, especially if you’re a veteran or if you have a loved one serving in the Armed Forces.

Essentially, it’s a military version of The Onion, as in the American news satire organization that makes faux news stories.  Like The Onion, the Duffel Blog is freakin’ hilarious.

Guns.com had a chance to interview the founder of the Duffel Blog, 29-year-old Paul Szoldra, a Marine Corps veteran who created the website to, well, make people laugh and to get them to think critically about the way they view the media, the news and the military.

Below is our Q&A with Szoldra:

Blannelberry: The Duffel Blog, what’s the origin of the name?

Szoldra: There’s nothing fancy about the name. Duffel Bag / Duffel Blog. It sounded catchy and memorable, and had a military connotation (since everyone has a duffel bag or in the case of Marines/Navy, a seabag). It took me about 5 minutes to come up with it.

Blannelberry: What’s the creative process for composing an article?

Szoldra: It’s different for every contributor, but just about every article starts first with the headline in mind. We usually will pitch headlines (in our private group) and writers will either, a) say that’s a great idea b) it sucks, or very often c) put it in a better way or give it another direction.

Once the headline is set and the idea is good, I will usually write the piece — about two to three paragraphs, then post it back to the group to get some input. Usually other writers will add in their two-cents, maybe have some quotes, or add in some ideas. Other times, I’ll just write the entire thing with little input. It really all depends on how creative I happen to be on that day.

Most of the time, however, articles may have the byline as one writer, but there have been many people along the way tweaking it and editing it before it is actually published.

Blannelberry: While some would argue it’s just glorified trolling, i.e. pissing people off for the sake of pissing people off, there is (I believe) a serious satirical agenda at work, can you speak to that point? What is the overall objective of the website?

Szoldra: Calling us “glorified trolling” is total B.S. We are a satire website. The people that would say we’re trolling probably don’t even know the definition of satire, but I’ll tell you: it’s a literary form in which follies, shortcomings, and annoyances are held up to ridicule, often using irony or humor. Humor, however, is not always necessary.

Either way, good satire always has a goal — a target. Every article we’ve ever written had some sort of target of ridicule in mind. If we’re doing our job, we’re making people think, often making them laugh, and demonstrating some of the absurdity that happens everyday in the U.S. military.

Blannelberry: Where do you draw the line as far as taste? Is there anything that’s off limits? To date, can you recall an article that’s gone too far or was too controversial? One that you wish you could have back?

Szoldra: There is no line. There is nothing off limits. The most sensitive “sacred cow” topics can be joked about or satirized as long as they are demonstrating some greater point. 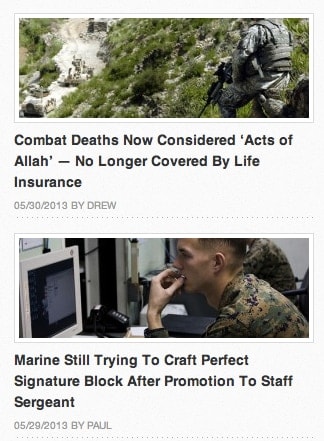 Blannelberry: So far, how have veterans reacted to the website? It appears that the vast majority of veterans love the website? According to other interviews you’ve done, you’ve talked about the cathartic effect the site’s had on some veterans, what does that mean to you?

Szoldra: Just about all of the fans of the website are connected to the military, either on active duty or veterans. Most have a positive reaction to the website, and they appreciate that fellow veterans (all the writers served or are serving in the military) can write and produce content that breaks up the monotony of their day.

We get messages sometimes from vets saying our stories get them to laugh and it helps them with PTSD, or we hear from top Generals saying they think the site is great. Getting those types of messages/compliments are amazing and something I didn’t really expect.

Blannelberry: However, presumably there are some individuals that find it offensive, what do you say to those critics?

Blannelberry: How has your personal experience in the military informed your comedic sensibility?

Szoldra: My experience in the military helps of course with writing, because I have intimate knowledge of the subject matter. I remember reading articles from The Onion on military topics and sometimes they would screw up a rank, or choose a wrong location, or something was “off.”

With The Duffel Blog, readers know we have the insider knowledge and understand what’s going on. We get military humor, which is oftentimes rather dark, and we are able to convey it in a way that is accessible to all services.

Blannelberry: What’s the goal of the website moving forward? Do you plan on expanding your comedic enterprise beyond military targets?

Szoldra: Not really. I’m fine with sticking with the military.

Our goal is eventually to write some books and do more multimedia stuff. We’ve done some video in the past, but we’d like to do some more. Right now, it mainly comes down to time (and how I rarely have any).

Big thanks to Paul for taking the time to answer some questions.  To learn more about him, check out his personal website.

Guns.com is a huge fan of the The Duffel Blog.  We hope our readers like it too.  Check it out and let us know what you think.