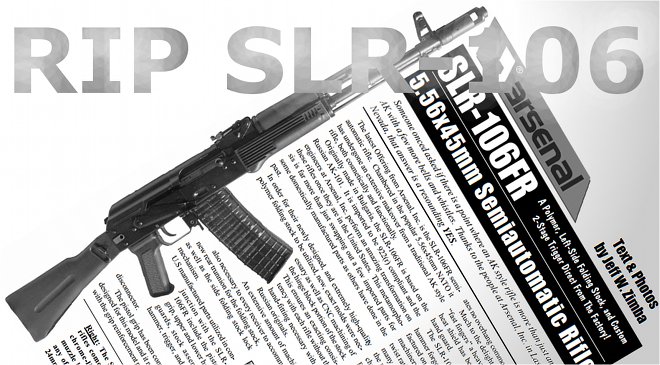 Arsenal, Bulgarian-American manufacturer of premium AK-pattern rifles and pistols, is halting the production of models chambered in 5.56 NATO/.223 Remington.

It’s not that these haven’t been popular firearms, but in order to keep up with the demand for their other firearms, primarily chambered for 7.62 and 5.45x39mm the company has decided to mothball their 5.56 hardware.

Arsenal’s ready to elevate the status of these firearms to “collectors’ items.” Not that you shouldn’t still shoot them.

“In my opinion, the SLR-106 series of rifles, perfectly bridge the gap from east to west,” said Walker English, Arsenal sales director. “Furthermore, the advancements made in the manufacturing this rifle series will be seen on future models by our company for years to come.”

We’re a bit sad to see them go, but with not just the private market but also military contracts pushing for firearms in the AK’s native calibers it makes sense from a production standpoint to not retool between runs and focus on fulfilling orders.

The last of the Arsenal firearms chambered for 5.56 are the SLR-106FR, SLR-106F, SLR-106CR and SLR-106UR pistol. From here on out, what in the distribution pipe is what’s going to hit the market.

This doesn’t mean that it’s permanent, of course; Arsenal may in the future bring back one or more “classic” 5.56 models.

In the meanwhile, consumers will have to seek out alternatives if they want an AK-type firearm chambered in 5.56/.223 Rem.

With the Fime Group quietly pulling their 5.56 models from their catalog and firearms from Izhmash selling faster than they can be made, finding AK-pattern firearms in 5.56 may be a bit more difficult in the future.

However, with American manufacturers manufacturing better and better AK-type firearms and other master Eastern European companies like Molot and Łucznik Arms continuing their production of 5.56/.223 firearms, it’s safe to say that it might be a little more difficult but far from impossible.