Secretary of State John Kerry released a statement today saying that the Obama administration will sign the U.N. Arms Trade Treaty despite protest by Congress. And there’s still no official word yet from the president himself speaking directly on the matter.

“We look forward to signing it as soon as the process of conforming the official translations is completed satisfactorily,” he said.  Kerry added that the ATT is “an important contribution to efforts to stem the illicit trade in conventional weapons, which fuels conflict, empowers violent extremists, and contributes to violations of human rights.”

Aware that the ATT would open for signature today, 130 members of Congress sent a letter to President Obama and the Secretary of State last week urging them not to sign the comprehensive agreement that regulates the international trade of conventional arms, e.g. battle tanks, armored combat vehicles, large-caliber artillery systems, combat aircraft, attack helicopters, warships, missiles and missile launchers and small arms and light weapons.

The bipartisan letter gives three main reasons why the Obama administration should not sign the ATT, here is a summary of those reasons (Guns.com recommends that you check out the full letter here):

1.  As ratified by the U.N. General Assembly the treaty is “deeply flawed,” in part because it doesn’t recognize personal self defense as an inherent right, it also contain’s the term “end user,” which can refer to individual firearms owners and may later be used to justify tougher international restrictions on gun ownership.

2.  Not only is the ATT “deeply flawed,” it also “suffers from vagueness.”  The ATT “defines none of the terms essential to interpreting or implementing it or defines them only by reference to terms that are themselves undefined.”  In other words, those member states that sign on are accepting commitments that are “inherently unclear.”

3. It further damages the diplomatic credibility of the U.S.  In 2009, former Secretary of State Hillary Clinton stated, “Consensus is needed to ensure the widest possible support for the Treaty and to avoid loopholes in the Treaty that can be exploited by those wishing to export arms irresponsibly.”

Basically, the effectiveness of the treaty hinges on the willful participation of those countries that do most of the arms dealing.  Consensus is critically important. But many key players — the world’s most important and irresponsible arms importers and exporters — Iran, North Korea, China, Russia and Egypt either abstained or voted against the treaty.  In short, consensus was not reached and the ATT was pushed through the U.N. General Assembly by a majority-rule outcome, which undermines both the ATT and the U.S.’s reputation as consensus-building nation.

The U.S. voted in favor of the treaty back in April and President Obama has been a supporter of the negotiations since his first term in office.  So, to many supporters of the ATT, it’s not a matter of “if” the president will sign it, it’s really a matter of “when” and the signal it sends to the rest of the international community.

“There is nothing in this treaty that requires the U.S. to do anything differently,” Rachel Stohl, a senior associate at the Stimson Center, a D.C.-based think tank, told the Inter Press Service. “Rather, the issue here is simply the symbolism of saying that [the U.S.] is committed to this on an international level – that’s really important.” 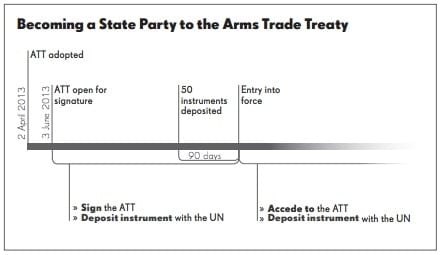 “The symbolism is not that there has to be any change to U.S. law,” she added. “Rather, it would be sending a signal to the rest of the world that the United States, which is responsible for 75 percent of the arms trade, is taking on this obligation as the world’s largest [arms] exporter.”

Some predict the president will sign the ATT in the coming weeks, others believe he will wait several months but sign it before a U.N. General Assembly meeting in September.  Either way, the ATT faces an uphill road to ratification in the U.S. because the Senate has to approve the ATT by a two-thirds majority, which seems unlikely given that approximately 50 senators have publicly stated that they would vote against adopting the treaty.

As for the fate of the ATT internationally, it needs 50 countries to ratify it before it takes effect.  Though, if key players refuse to sign on the dotted line and actively play by the new rules and regulations, which require a lot of self-reporting and transparency with respect to dealing arms, the treaty won’t be worth the paper it’s printed on.

For more on how the ATT is supposed to curtail and prevent human rights abuses or violations of international humanitarian law, click here.