Florida Man Holding Teen Burglar at Gunpoint: 'You can cooperate or go home in a box' (VIDEO) 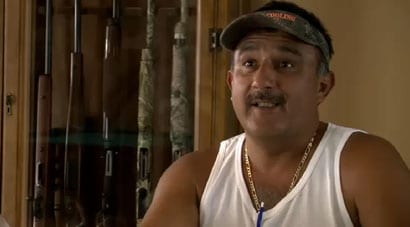 “If he had made it in my house, they would have carried him out of here in a box.” (Photo credit: NBC2)

When a Florida homeowner’s daughter told him that a masked man was trying to open the door to their Fort Myers home early Sunday morning, the dad grabbed his gun and went to find the would-be home invader. While holding the suspect at gunpoint, he was surprised to discover that the suspect was a teen boy who lives a few doors down.

Charles Canales, the homeowner told a local news station that he has been in the neighborhood for 40 years. “I know a lot of people in this neighborhood and we are tired of kids coming in here and being stupid,” he said. Apparently, a teen boy breaking into his neighbors’ homes and cars is the kind of stupid he’s referring to.

Canales’ daughter was awakened by the sound of a rattling door at about 5 a.m. and was surprised to see a masked man wearing gloves trying to open the door. The man, who was later identified as 18-year-old Randall Hicks, tried to open another locked door before moving on to the next home. Only Canales’ daughter told her dad what she had seen and he went to find the man who had just tried to break into his home while his daughter slept.

When Canales’ found Hicks he had moved on to the neighbor’s driveway and was breaking into their car. Completely absorbed in his work, Hicks didn’t even notice Canales walk up behind him, or the home security camera that he was working under. But when Canales stuck his .45 to Hicks’ forehead and a flashlight in his eyes, he got his full attention. Then Hicks began to beg and plead with him.

“He was offering me money to let him go. Offering me whatever he had already stolen,” Canales said. His response? “I told him he was leaving in a squad car or in a box,” he told a local NBC affiliate.

Canales, along with his daughter’s boyfriend, held the suspect at gunpoint until deputies arrived. Hicks was arrested and booked on 11 different charges.

The teen was carrying a backpack full of various stolen items – cameras, flashlights, cell phone chargers – all items that he had stolen from his own neighbors.

Knocks on the door of Hicks’ resident went unanswered. Canales’ neighbors did not want to talk on camera, but they all said that they thank Canales for his bravery and they all plan to press charges against Hicks.

Canales called Hicks lucky. “If he had made it in my house, they would have carried him out of here in a box,” he said.