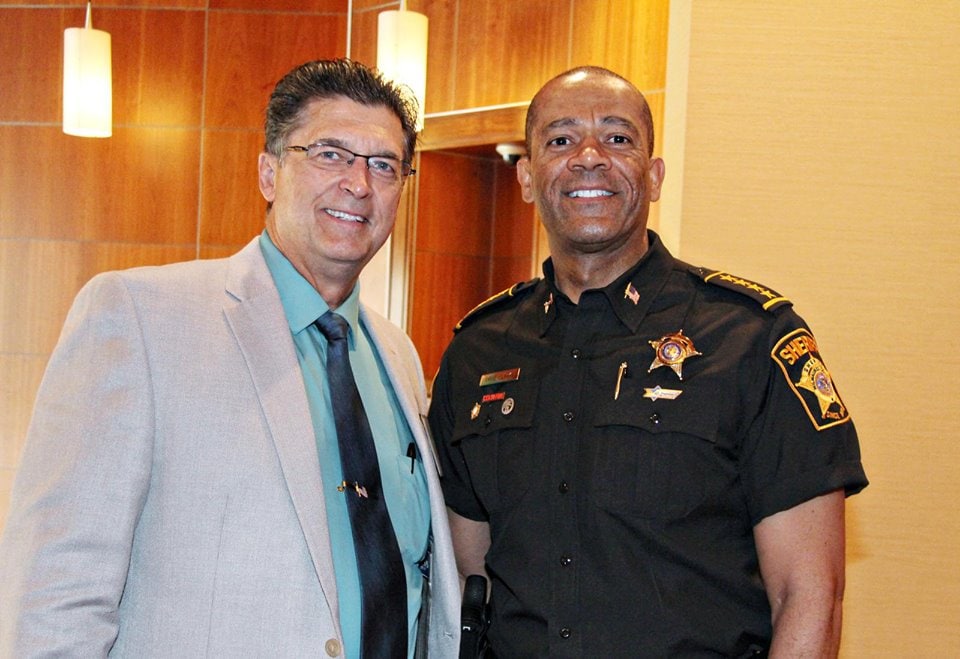 At the Constitutional Sheriff’s and Peace Officers Association conference on Friday in St. Charles, Missouri, Milwaukee Sheriff David Clarke summarized the show’s message during his acceptance speech for Sheriff of the Year as he urged the attendees and all citizens to continue to stand up for all of their individual rights.

While CSPOA says its mission is to defend the U.S. Constitution — presumably from the Federal government — the group’s founder, Richard Mack, said he created it to challenge aspects of the Brady Bill, which instituted federal background checks on firearm purchases, when it was signed into law by President Bill Clinton in the early 90s.

According to the CSPOA’s website, there are currently more than 450 sheriffs across the country that have publicly stated they will not enforce unconstitutional gun laws. And although gun rights are at the center of the debate, Old Monroe Police Chief Larry Kirk, who lobbied the event, explained that the message is about much more than that. He said that he wants law enforcement officials, as well as all citizens, to pay more attention to Constitutional issues.

“Whether it is gun rights or your property rights or your personal rights, no one right is greater than any of the rest of them. So if you are going to allow one person’s rights to be violated in one regards then you shouldn’t expect your rights to be protected,” he said.

One could argue that the law enforcement community is divided on the issue of gun control, however, in that same breath one can confidently say that sheriff’s are more likely to support gun rights.

Clarke, the three-time elected sheriff, was thrust into the national spotlight in January because he publicly advocated for gun ownership over gun control, and he subsequently garnered praise from the gun rights community and criticism by gun control advocates (most notably CNN talk show host Piers Morgan).

However, national attention, whether it be positive or negative, hasn’t prevented other law enforcement officials from speaking out on the issue.

Just last month Indiana’s Elkhart County Sheriff Bradley Rogers pledged to uphold his oath of office and not allow laws to be enforced in his county that he finds unconstitutional. While some argue that he has the responsibility to uphold Federal laws, he states that his oath is to uphold the United States Constitution.

Also last month, Austin Police Chief Art Acevedo came out in support of “closing the gun show loophole”, and got in trouble for getting in a heated debate on Twitter about the matter.

Of course, we should take what these officials say seriously, as they are presumably experts in their field, but how much should we value their opinion when it comes to shaping public policy? What are your thoughts?