The defense attorneys representing George Zimmerman in the highly controversial Trayvon Martin case said over the weekend that the fight footage recovered on the slain teen’s cellphone is not two of Martin’s friends beating up a homeless man as they initially alleged in court last week, but two homeless men brawling over a bicycle. 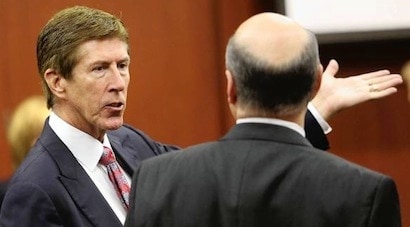 “During the Tuesday, May 28 hearing, Mr. O’Mara misstated the nature of video from Trayvon Martin’s cell phone which was included in the Defendant’s 3rd Supplemental Discovery,” read the statement.

“He stated that the video showed ‘two buddies of his beating up a homeless guy,’ when what happened was Trayvon Martin, along with a buddy, was videotaping two homeless guys fighting each other over a bike,” it continued.

As reported in a previous Guns.com article, O’Mara is culling together character-impugning evidence — photos of the Trayvon smoking, handling a firearm and text messages that show him fighting with his mother about skipping school — on Martin to use in court if prosecutors try to portray the teen in a pure and uncompromising light.

In this instance, it’s rather clear that O’Mara mischaracterized the event in question, perhaps damaging his own reputation in the process.

“Though it was unintentional, it is a particular concern to us because we are and have been committed to disputing misinformation in every aspect of this case, not causing it. For that, Mr. O’Mara apologizes,” the statement concluded.

Here’s video of a different fight that Martin recorded and pasted on his YouTube Account. He titled it, “anthony vs. curtis.”

In other news on this case, the Fifth District Court of Appeals ruled on Monday that Martin’s family attorney Benjamin Crump must make himself available to answer questions under oath by Zimmerman’s defense attorneys.

The court overruled trail Judge Debra S. Nelson, who twice declined O’Mara’s request to depose Crump, stating that the defense had a right to interview Crump about his dealings with a key witness, the young woman who spoke to Trayvon on the phone just minutes before he encountered Zimmerman.

Crump had interviewed the the woman on March 19, 2012, along with two employees of ABC News. As long as O’Mara sticks to a script and only asks questions about the interview and about the circumstances surrounding the interview, then he can depose Crump the appeals court ruled.

O’Mara cannot ask questions about how he got in contact with the woman or why he did so in the first place, the Orlando Sentinel reported.

However, none of this seemed to bother Crump, who said in a statement, “I am available to be deposed, and the trial should not be delayed in any possible way…”

The trial is scheduled to start June 10 in Sanford, Florida. Zimmerman is facing second-degree murder charges for fatally shooting Martin in his gated community on Feb. 26, 2012. O’Mara will likely argue that Trayvon attacked Zimmerman forcing him to use deadly force in self-defense.