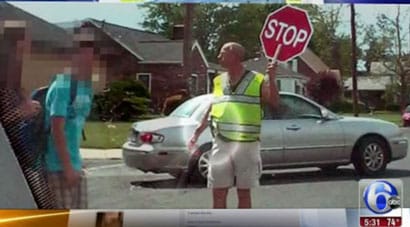 The picture posted on Facebook of Scott Becker, the Penn. crossing guard who was told to hang up his holster. (Photo credit: ABC 6, Philadelphia)

Parents depend on 52-year-old Scott Becker to protect their children while crossing busy Washington Avenue in Bethlehem, Pennsylvania. As a crossing guard, the safety of the children on his street is his primary concern. Becker, who has a valid firearms permit, carries his .40-caliber Smith & Wesson for protection, not only at this job, but at all of his jobs, including the several cash-oriented businesses he owns. However, a meeting with school officials on Monday morning brought his pistol packing days – at least while working as a crossing guard – to an end.

The controversy started when someone took a picture of him with a gun on his hip while working and posted it on Facebook Friday. The person who posted the picture was apparently concerned about the safety of the children and, according to a report by an ABC affiliate, questioned the wisdom of carrying a gun in a school zone.

While Pennsylvania law allows open carry with a permit, federal law still makes the school where Becker is employed as a crossing guard a “gun-free zone.” Even though the street where he helps children to safely cross is public property, it is within 300 feet of the school’s property, deeming it by statute part of the gun-free zone.

When asked to no longer carry his gun during working hours, Becker happily complied. “Usually I have it on me, but he asked this morning to take it off while crossing the kids, and I have no problem with it. I don’t want to cause grief for anybody. I’m not out to be the monster or anything. I’m just out to do my job,” he said.

Becker has been the school’s crossing guard for eight years. He starting carrying a handgun last year and this is the first time that it’s become an issue. He carries everywhere else he goes and explains that he felt it was a good idea in case there was ever a threat against the children. “That way I would be here as the first person to respond. I would be here right away before someone else could respond,” he explains. After all, in the event of an emergency, police aren’t always able to immediately respond.

While some pose concerns over allowing a law-abiding citizen with a handgun permit to carry a gun around children, not everyone thinks it’s such a bad idea. Dave Donio, father of a student at the school, says, “Good for him. I think it protects my kid and the other kids. I think it’s a good thing if he has a carry permit and he is trained.”

Becker agrees to hang up his holster while crossing kids at the school, but says he will continue to carry elsewhere, including his laundromat which has been broken into in the past.