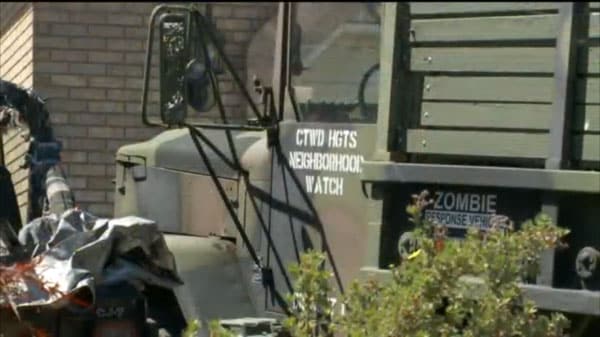 Utah’s top gun rights lobbyist is in the news – again. Clark Aposhian was arrested on Memorial Day after he allegedly threatened his ex-wife after showing up to her house in a “deuce and a half.” According to The Salt Lake Tribune, she says he threatened to run over her car with the ‘big boy toy’, he says he was just rolling around in the military surplus truck to celebrate Memorial Day.

The “bizarro world” incident, as Aposhian called it, was one part of an ongoing harassment that his ex-wife claims she has dealt with during the continuing custody battle over their 11-year-old daughter. The daughter, who was home at the time her daddy rolled up in his big boy toy, apparently told police that she was scared when he showed up at the house.

According to the ex-wife, Aposhian drove the deuce and half up to her home, where she lives with her current husband, honked the very loud air horn, then backed into the driveway, driving over part of the lawn and nearly hitting a jeep that was parked in the driveway.

She then called her current husband to inform him of the ordeal and he retaliated by calling Aposhian and told him not to come by their home again. Apparently then Aposhian informed him that he could go wherever he wanted to, chided him that his truck was bigger than his and threatened to run their cars over with his military vehicle. Somewhere in the midst of the conversation between the current and former husbands, the word “bury” got thrown in there, which was obviously taken as a threat.

The police were called and came to the residence to investigate the incident involving the 2 1/2-ton truck when Aposhian showed up to the house again – this time toned down in his Dodge Magnum – though with no less theatrical results. In the words of Sgt. Askerlund with the Cottonwood Heights Police Department: “While we’re there investigating the trespassing and the threats, he comes back, and to make a long story short: Mr. Aposhian was arrested for domestic violence and trespassing.”

Askerland described Aposhian as “not cooperative.” He also stated, “He did indicate to the officers that he was carrying a weapon. The officers took his weapon away. He was charged with a crime. They booked the weapon into evidence and transported Mr. Aposhian to jail.” 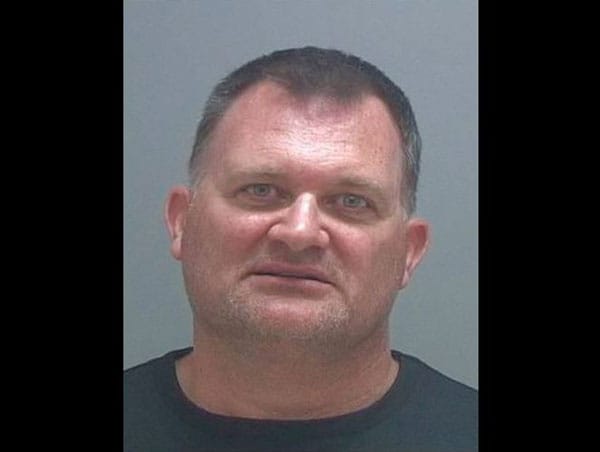 Aposhian was charged with four class B misdemeanors, including domestic violence in the presence a child, criminal trespass, criminal mischief and threats of violence. In addition he was charged with multiple traffic violations and failure to appear in court. His arraignment was scheduled yesterday.

Although Aposhian has offered very little comments on the incident, his lawyer, Mitch Vilos, said in a statement, “My preliminary investigation strongly indicates that the charges against Mr. Aposhian are false… Mr Aposhian made no threats and Mr. Aposhian will be completely vindicated.”

Aposhian continues to assert that he is innocent of all the charges. He claims that when he drove up in the deuce and a half he was only in the neighborhood visiting friends, and he only turned around in his ex-wife’s driveway because the 2 1/2-ton army truck was too large to turn around in the street. He also apparently has a friend who was in the truck with him that will attest to this, as well as several other witnesses that will state he did nothing wrong and threatened no one.

But what about returning to his previous residence, now currently occupied by his ex-wife and her new husband, after the so-called threatening phone call with his ex-wife’s current husband? Aposhian says he was only returning to clean up any tire marks that his big boy toy had left behind.

In addition, Aposhian’s ex-wife filed a protective order against him on Friday, meaning that he must hand over, at least temporarily, all of his firearms, as well as his concealed carry permit and his CCL instructor’s license. Vilos, who has not yet seen the protective order, called it a “legalized form of extortion to put him [Aposhian] out of business.” If convicted, Aposhian will permanently lose his right to either own or possess firearms, in addition to losing his chairmanship of the Utah Shooting Sports Council, his influence in the Utah Capitol and his 10-year seat on the state’s concealed-firearm review board. Essentially, if convicted it will be the end of Aposhian’s career.

While it’s not my place to pass judgment, as I wasn’t there and didn’t witness the event, I’m thinking that if you’re a loud-mouthed, outspoken gun rights advocate that wants to go riding around in your deuce and a half on Memorial Day (And I mean, who wouldn’t? I certainly would!), maybe it’s not the best idea to go driving by the house that you used to share with your ex-wife, who incidentally she now shares with her current husband, not you. And if you must use a driveway to turn the beast around, maybe it’s a better idea to turn around in the driveway of one of those friends in the neighborhood that you were just visiting, rather than risk being slapped for harassment allegations by your ex-wife whom you’ve been in an ugly custody battle with for the last six or more months anyway.

In other words, stay the heck away from your ex-wife and her “bizzaro world” because you’re making the rest of us gun owners look bad.