When is a Magnum not really a Magnum? A .22-caliber test (VIDEO)

Those are all claims taken right off of the box of three different boxes of .22 Magnum (technically, the .22 Winchester Magnum Rimfire cartridge) ammo. And when you see numbers like those, it’s really easy to get excited about how much more powerful the .22 Magnum is over your standard .22 LR.

That’s one of the reasons that our Ballistics By The Inch project exists: to find out just exactly what the reality of handgun cartridge performance is, and to see how it varies over different lengths of barrel.

And the first weekend of May, we did a full sequence of tests of 13 different types of .22 Magnum ammo to find out.

About four years ago we started testing handgun cartridges out of different lengths of barrel, using a Thompson/Center Encore platform, which has been altered to allow a number of different barrels to be quickly mounted. The procedure is to set up two chronographs at a set distance from a shooting rest, and fire three shots of each type of ammo, recording the results. Once we’ve tested all the ammo in a given caliber/cartridge, we chop an inch off the test barrel, dress it, and repeat the process, usually going from an 18-inch starting length down to 2 inches. The numbers are then later averaged and displayed in both table and chart form, and posted to our website for all to use.

For those who are interested in the actual raw data sets, those are available for free download. To date we’ve tested over 25,000 rounds of ammunition across 23 different cartridges/calibers.

To do the .22 Magnum tests things were slightly different. We started with a Thompson .22 “Hot Shot” barrel and had it re-chambered to .22 Magnum. Since this barrel started out 19-inches long, we included that measurement in our tests. 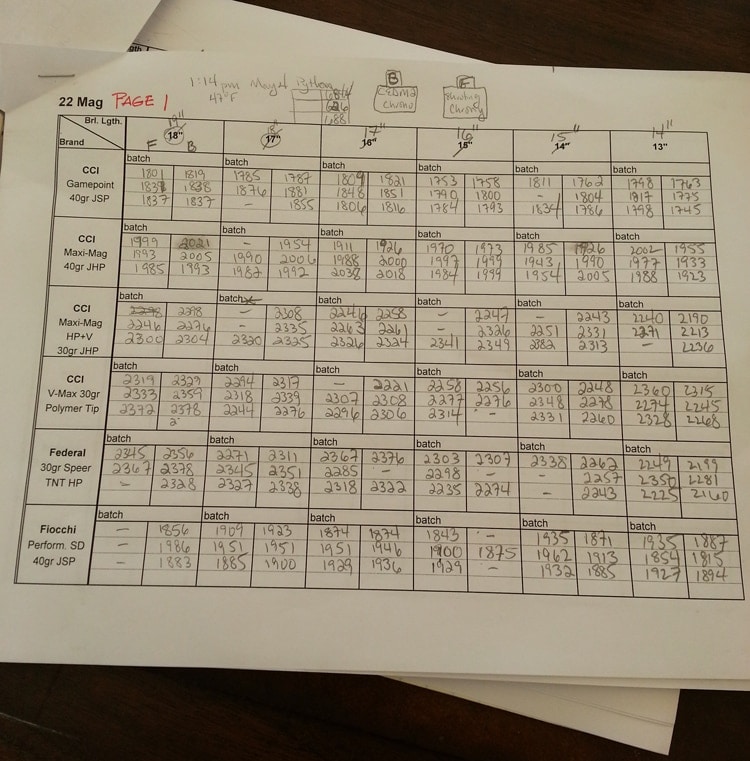 A data set taken for the .22 Magnum tests.

So, how did the .22 Magnum cartridge do?

See those claims from manufacturers at the top of this article? Two of the three were supported by our test results. The third was not.

I don’t want to pick on those specific brands/types of ammo, though. I just grabbed three of the boxes we tested at random. Altogether we tested 13 different brands/types of .22 Magnum ammo, and let’s just say that the performance you actually see out of your gun will probably vary from what you see claimed from a manufacturer.

Now, that’s not because the ammo manufacturers are lying about the performance of their ammo. Rather, the way they test their ammo probably means that it isn’t like how you will use their ammo. This is most likely due to the fact that the barrel length and testing conditions are pretty different than your typical “real world” gun.

So, what can you expect from a .22 Magnum cartridge?

Well, that pretty much depends on how long a barrel you have on your gun.

Also typically, most handgun cartridges tend to level out somewhere around 6 to 8 inches. Oh, they usually gain a bit more for each inch of barrel after that, but the increase each time is increasingly small.

The real exception to this, as I have noted previously, are the “magnum” cartridges: .327 Magnum, .357 Magnum, .41 Magnum and .44 Magnum. The velocity/power curves for all these tend to climb longer, and show more gain, all the way out to 16 to 18 inches or more. There are exceptions to all these rules, but the trends are pretty clear.

So, does the .22 Mag deserve to be listed with the other magnum cartridges? 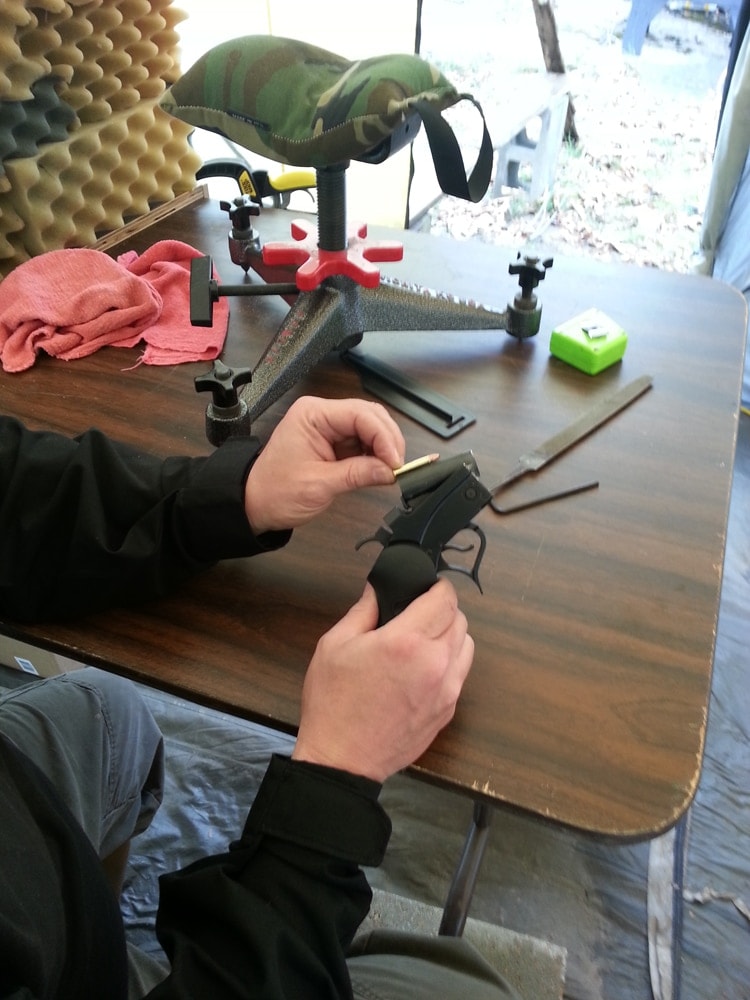 Loading the chamber of the cut down Thompson/Center with a .22 Magnum cartridge at the lovely workstation.

Well — maybe. Compared to the .22 LR, the .22 Magnum gains more velocity/power over a longer curve. But it also starts to flatten out sooner than the other magnums — usually at about 10 to 12 inches. Like most handgun cartridges, there are gains beyond that, but they tend to be smaller and smaller.

For me, the take-away lesson from these tests is that the .22 Magnum is a cartridge that is best served out of rifle barrel. At the high end we were seeing velocities that were about 50 percent greater than what you’d get out of a similar weight bullet from a .22 LR. In terms of muzzle energy, there’s an even bigger difference: 100 percent or more power in the .22 Magnum over the .22 LR.

But when you compare the two on the low end, out of very short barrels, there’s very little if any difference: about 10 percent more velocity, perhaps 15 percent more power. What you do notice on the low end is a lot more muzzle flash from the .22 Magnum over .22 LR.

While you do see a real drop-off in velocity for the other magnums from very short barrels, they tend to start at a much higher level. Compare the .357 Magnum to the .38 Special, for example, where the velocity difference is 30 to 40 percent out of a 2-inch barrel for similar weight bullets, with a muzzle energy difference approaching 100 percent. Sure, you get a lot of noise and flash out of a .357 snubbie, but you also gain a lot of power over a .38.

But then there’s the curious case of the Rossi Circuit Judge with an 18.5-inch barrel, chambered in .22 Magnum. You see, it only performed as well as my SAA revolver with the 4.625-inch barrel. This was so completely unexpected that we thought we had to have made a mistake, or the chronos were malfunctioning, or something. So we went back and tested other guns for comparison. Nope, everything was just fine, and the other guns tested as expected.

So we made a closer examination of the Rossi and it just goes to show where there’s a rule, there’s an exception. Yup, there’s a good reason why it was giving us the readings it was. And I’ll reveal why when I do a formal review of that gun.