A masked gunman executed a teenager in broad daylight Sunday, and the entire incident was caught on surveillance camera.

According to witness Shadeed Abdar-Raheem, who was grilling burgers near his house in Oakland, CA, around 2:45 pm, a masked gunman suddenly appeared on scene and fired several rounds at a small group standing nearby.

“I’m very upset. It drained me so I went in the house and laid down,” said Abdar-Raheem.

The video depicts people scattering in every direction as the shooting begins – causing one man to get hit by a trailer, sending his shoe airborne. A 17-year-old boy falls to the ground in the melee as the shooter continues his assault. He then fires several more shots into the teen, point blank, as the boy puts his hands in the air.

“He had already shot him, and then he shot a boy across the street. And then he shot [the boy on the ground] again.” said Abdar-Raheem. “That was kind of beasty — just no regard for life.” 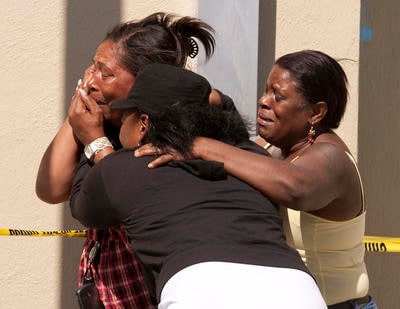 Oakland Police later identified the murdered teen as David Manson, Jr. On Monday an improvised memorial near where the shooting occurred was deluged by devotional candles and personal messages for the slain boy.

Neighbor Contee Vility said she and her kids took cover and cried as the salvo was heard Sunday.

“What do we tell our kids now? You can’t grow up to be 17? And you can’t help where you live. We’re locking people up instead of giving them some help, giving them some hope. And the problem is, we lost hope.”

Although two other individuals were injured, they were expected to survive. Police are currently searching for the suspect who took off in a car and claim to have several leads. According to authorities, seven shootings occurred in Oakland over the weekend – only one being fatal.