I love surveys.  They’re like norming sessions for our national opinions.  After-all, how would we cave in to peer pressure without first knowing the opinions of our peers?  How are we to properly exhibit unthinking herd mentality without knowing which way the herd is headed? 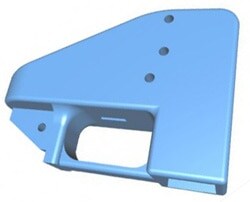 So I was ecstatic when I read that the Princeton Survey Research Associates International had “executed [a] nationwide Reason-Rupe survey.”  The real meat of the survey reveals how Americans feel about 3D printed guns.

The survey was executed.  What a loaded word.  Couldn’t they have simply conducted the survey?  Sorry.  I’m off message.

There were a lot of questions asked, and almost all of them hit on something political.  If you need to know how your attitudes on gay athletes or banning plastic bags line up with those of your peers, this is the survey for you.  But we’re going to gloss over marijuana and taxation for preschool and get to what really matters: guns.

The question is clear enough.  To avoid any sense of bias, pollsters are instructed to switch up the option of debating and moving on.   And respondents are permitted to volunteer other answers that make no sense whatsoever.  Both.  Neither.

Now most of us are going to answer “Already have gun in household,” but they’re not polling Guns.com readers.  Only 5 percent of the respondents reported owning guns already.

31 percent said more likely.  9 percent said they were less likely.  That leaves the majority of people in the “not much difference either way” camp.

I like how these two questions are ordered.  We know that 3D printing is one of the most contentious of the current gun debates, but the survey’s respondents might not.

Should Americans be allowed to print unnecessary plastic objects in their own homes?  62 percent say yes.  To be honest, I’m astounded the percentage in that low.  Why wouldn’t we?

Oh yeah.  I remember.  Cody Wilson.  Defcad.  The Liberator.  All of that freedom that scares so many people.  53 percent say printing guns should not be allowed. 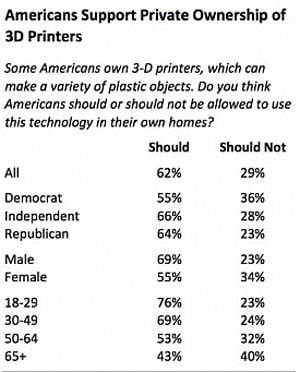 But let’s look at the methodology

According to the creepiest clock I’ve ever seen (a rolling odometer of sorts that keeps track of the population), there are 315,991,195 people in the country.  For those of us challenged by the profusion of commas in that number, it is roughly 316 million.  The survey reached a staggering 1,003 of that 316 million Americans (though, to be fair, there were probably fewer way back in May of 2013).  Math.com told me that’s 0.0003% of the population.

Can we pretend to understand how a majority of Americans feel about anything after asking what appears to me to be a rather modest minority of the population?  I was an English major.  I got a D in statistics (a D I earned only after I volunteered with my statistics professor’s son’s Cub Scout pack).  But I’m troubled by the assertions of the survey given the low number of respondents. 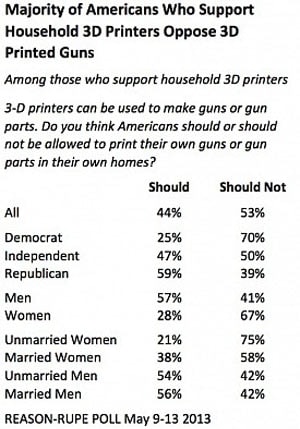 Maybe I’m just jealous that they didn’t call me.  Here’s how I would have answered.

With regards to the Boston bombing, I was already carrying and I continue to carry.  I live 10 hours from Boston, but I consider it my community.

With regards to all politic, I’m fine with the senate continuing to examine their collective belly buttons.

But the survey didn’t have that as an option.

Should Americans be allowed to print guns in their own homes?  Sorry.  Gotta go.  I think there may be a jam my printer.