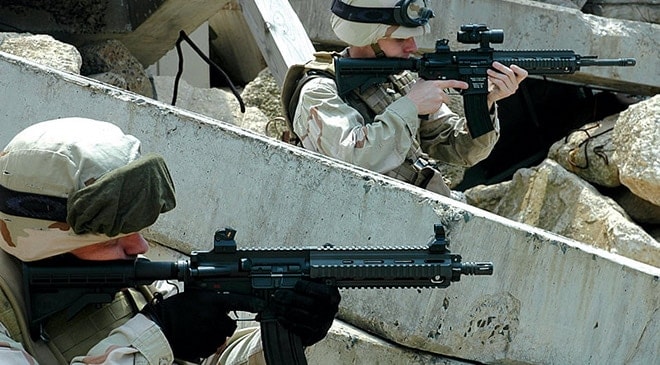 The House Armed Services Committee voted unanimously on an amendment to the 2014 National Defense Authorization Act that would require the Army to finish phase III of the Individual Carbine competition. The competition would determine if, and what rifle may replace the M4 in service today.

The Individual Carbine competition began over five years ago and has pitted offerings from top-tier companies against each other to find out if newer carbines perform better than what’s in use currently, including Colt, FNH, Heckler & Koch, KAC and Remington.

In 2012 the Army began phase II of the competition, having narrowed their selections down to the the Adcor Defense BEAR Elite, the Beretta ARX-160, and the Colt Enhanced M4, FN FNAC, the Heckler & Koch HK416A5 and the Remington ACR, to see if they outperformed the M4A1.

Earlier this year, however, the program was audited by the Defense Department, which determined that the costs of the final trials were inconsistent with the existing M4 upgrade Product Improvement Program (PIP) and found that the Army, which is already facing cutbacks, should push the $49 million set aside for phase III back upstream for other uses.

In May, the Army issued a statement that they in consideration of the audit that they would suspend further evaluation of replacement rifles. The program was suspended, not to see further trials.

The PIP would take existing M4A1s, which already have heavier, cooler-operating barrels than M4s and more consistent full-auto trigger systems and further accuratize them with free-floating handguards and equip them with other off-the-shelf upgrades to make them more effective.

If this amendment becomes law, the Army will have no choice but to complete phase III, unless they cancel the program outright before then.

On the one hand, this gives hope to all the companies that were slated to compete in phase III, but it may force the Army’s hand to cut the program loose before they are forced to pledge more of their budget towards it.

The Army just signed a $77 million contract with FNH to purchase 24,000 new M4A1s to replace older M4s as needed. While the Improved Carbine has reliability and accuracy standards that exceed the M4’s, the PIP-improved M4A1s offer a to-be-determined middle ground between what’s in service now and what the Improved Carbine promises — and it’s already in the works.

Do you think it’s wise for the Army to evaluate a possible advanced replacement for their current carbines? Or do you think they’re throwing good money after bad and should focus on reigning in their budget?