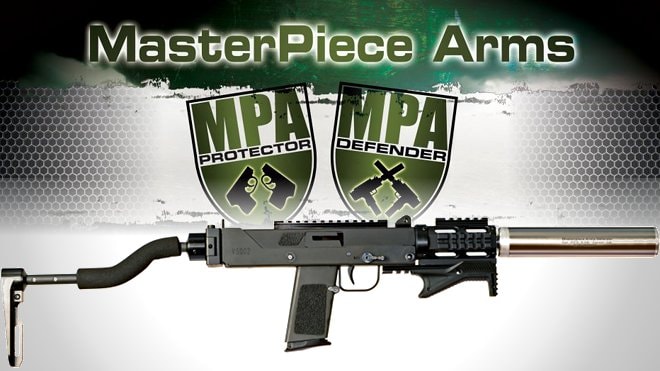 MasterPiece Arms is now offering their side-folding stock sold separately as a kit. This allows people who own one of their MAC-type carbines to swap out the fixed stock or convert MPA pistols to SBRs.

The assembly kit includes a side folder mechanism, L-Bracket, a stock adapter, fasteners and the MPA low-profile padded stock. The stock locks both open and closed and has a handful of integral sling attachment points. As a side benefit, the adapter uses a 1-3/16 screw mount that accepts standard AR-15 buffer tubes in addition to the low-profile stock. 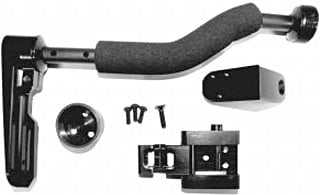 The stock folds to the left, away from the ejection port.

Just a reminder, installing this stock onto a pistol is requires that you register the firearm as a short-barreled rifle as per the NFA.

MasterPiece Arms has been keeping up with the Jones’ this year, having recently introduced updated models of their suppressors.

The new MPA Vigilant II and Sentinel II offer top-tier performance for a fraction of the price. Chambered for .22 Long Rifle and .22 LR/.22 WMR/FN 5.7x28mm, these upgraded silencers are some of the most affordable on the market.

The two suppressors differ in materials used, not construction. The Sentinel II is an alloy can machined from 7075 T6 aircraft aluminum with a hard-anodized black finish. It weighs an insignificant three ounces. The Vigilant II is made using 340L stainless steel and weighs a heftier 7.4 ounces, but is full-auto rated for .22 LR and can also be used with .22 WMR and .17 HMR.

Both are rated at 116dB (10-shot weighted average using NI Labview Software/GRAS .25-inch Microphones) with standard-pressure .22 LR ammo, and measure in at 5.7 inches long, one inch in diameter and have a 1/2-28 thread.

The alloy Sentinel II has an MSRP of $280 and the stainless Vigilant II just $326.

The MPA 556 features solid phosphated stamped steel construction paired with a free-floating two-piece anodized aluminum handguard, modular Picatinny rails and a side charging handle that doubles as a forward assist.