Still Looking for a Gift for Dad? Try Our Father's Day Shopping Guide

Father’s Day is coming up fast — June 16! — so it’s time to start shopping, if you haven’t already.  Here’s a wide variety of ideas that may help jump start your gift giving efforts. 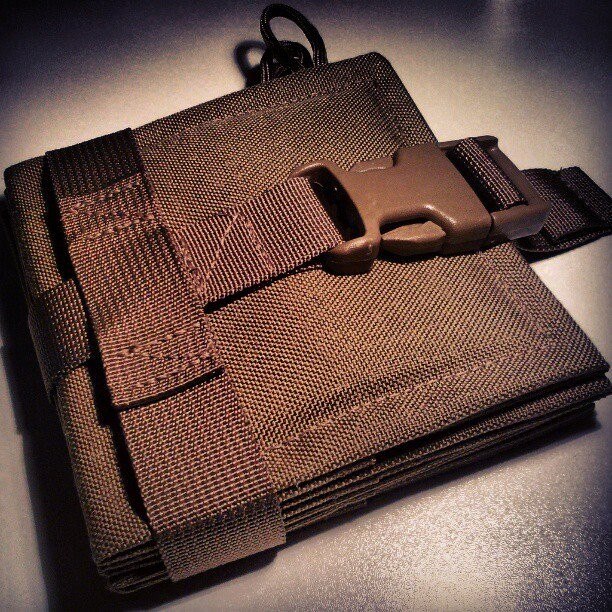 For some, the ideal Father’s Day gift should emphasize the masculine.  They should fly in the face of the mother and remind her that this is his day.  And nothing is as apt to offend mom’s delicate sensibilities like the wrong coasters.  And these are wrong in exactly the right way.

Imagine how awkward she might feel when your dad pulls these out at the next dinner party, or places them strategically beside the doilies on coffee table.

The Tareinco Man-Coaster set is made of nylon and neoprene.  They sell for $20. 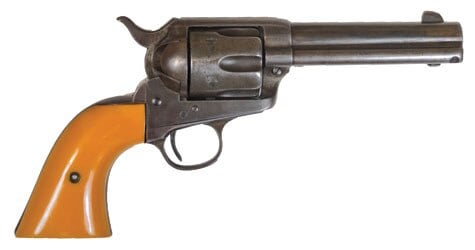 Need to keep him on mom’s good side, but still want to pick up something that he’ll really love?  Nothing says respect like a single action.  My father and I shared a deep and abiding love for old westerns.  While we never connected on cars or computers, we agreed on sepia toned cinema stereotypes.  And that’s where Cimarron comes in.

The Cimarron Rooster Shooter would have made my old man’s eyes water.  While the name implies an avian massacre, the Rooster Shooter is a copy of John Wayne’s Colt 1873, made popular by the iconic Roster Cogburn role in True Grit.  These antiqued guns will set you back about eight bills. 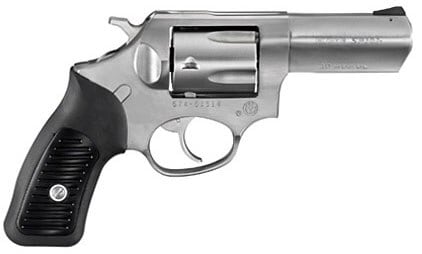 Does he already have a gun?  Forgive me for assuming he does.  If he is a gun guy, a nice single action will supplement his collection.  If not, I’d suggest a double action.  And for rock-solid affordability and ease of use, nothing beats a Ruger SP101 in .357.

The 3-inch barreled .38/.357 is the best.  Small enough to carry concealed, and large enough to feel somewhat accomplished while shooting at the range, the SP 101 is the very nature of versatility.  And it is perfect for teaching fundamental safety skills.  The SP 101 sells for somewhere around $600. 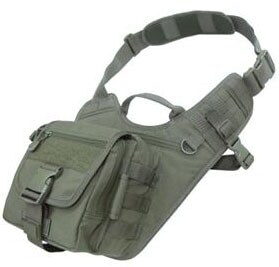 But how’s he going to carry it?  A friend of mine called last week and asked that I help him find the perfect man-purse for his dad. He’s looking for something his father can carry everyday, something he can put on when he leaves the office, or heads out to the job site.

The Condor EDC is ideal.  While it may look a bit too tactical for formal business wear, it can pass with casual business casual.  And it has the slim pocket at the top that allows for well staged off body concealed carry.  And for less than $40, it is an affordable gift. 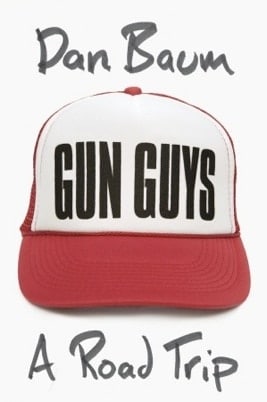 Maybe your dad’s more of a reader than a shooter these days.  Old guys slow down, but their love of guns doesn’t fade.  They may not be able to shoulder a Remington 870, but they might be able to pick up a book.

We ran into Dan Baum at the SHOT Show this past January, before the book’s official launch, and had a great conversation.  Baum’s attempt to understand gun culture from the point of view of participant observer is part ethnography, part sociology.  And its about us.  The gun enthusiasts.

If nothing else, it is a good read.  And at $18, and available in many bookstores, Gun Guys might be one of the easiest on this list to find. 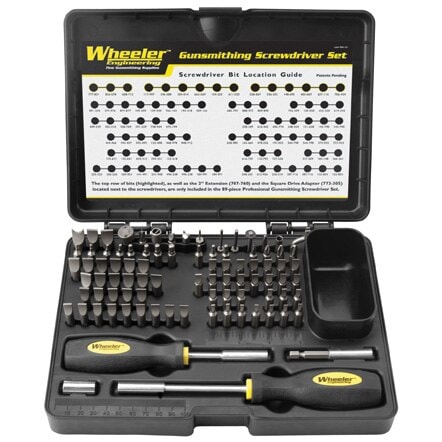 Dads love tools.  I picked up one of these kits recently.  I use it almost everyday.  I know I’m not typical.  I use my set for honest work.  My father, though, liked to tinker.  When he wasn’t actually working on a project, he was in his basement lair tinkering.

The 89 Piece screwdriver set is useful as an organizational tool and an actual tool.  All of the bits are here.  And while it seems like overkill, each has a unique function and is perfect for the job.  At $89, it is pricy for a screwdriver set.  But when he needs the one bit that the kit provides, it will be well worth it. 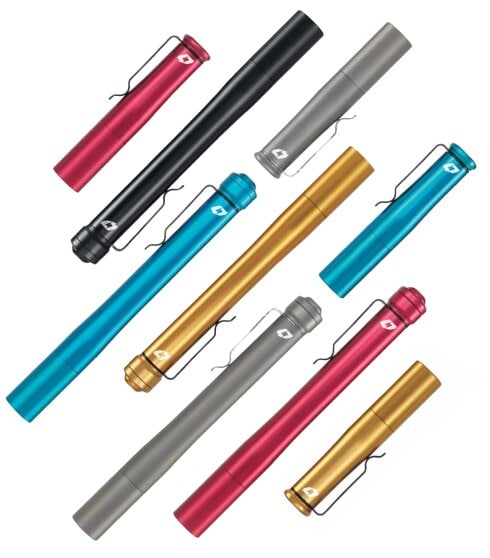 Maybe he’d like a good flashlight.  FourSevens makes really versatile lights.  We reviewed the Quark Tactical a couple a while back, and it is a tremendous service light.  We also have a more modest pen light from FourSevens, the Preon.

The light is small and subtle enough to fit into a pocket.  It isn’t ostentatious, yet it is filled with cool and useful functions.  A single click cuts on a low level light that’s ideal for basic needs.  Keep clicking and the light gets bright enough to momentarily blind an assailant.  And the hard anodized aluminum tube can double as a persuasive tool in capable hands.  The Preon is large enough to be useful, small enough to actually carry, and a great deal at $50.  And if the pen sized light is too big, they make a half-sized version that will fit comfortably in any pocket.

Yes, this list features two plugs for Ruger.  But this one is one of the better deals I’ve seen that honors fathers.  Ruger’s running two specials.  One offers free shipping if you buy three or more magazines.

10/22 magazines, magazines for their semi-auto center-fires, or their new 5.56 magazines that are indestructible.  Not a bad deal, and it runs until June 30.  I don’t think you have to provide proof that you’re buying for your father, either.  So not a bad time to stock up.

And if you want a big 10/22 magazine and a laser for a 10/22, they’re offering free shipping there, too.  This is especially useful for the old geezers whose eyes aren’t what they used to be (and who don’t like reloading, either). 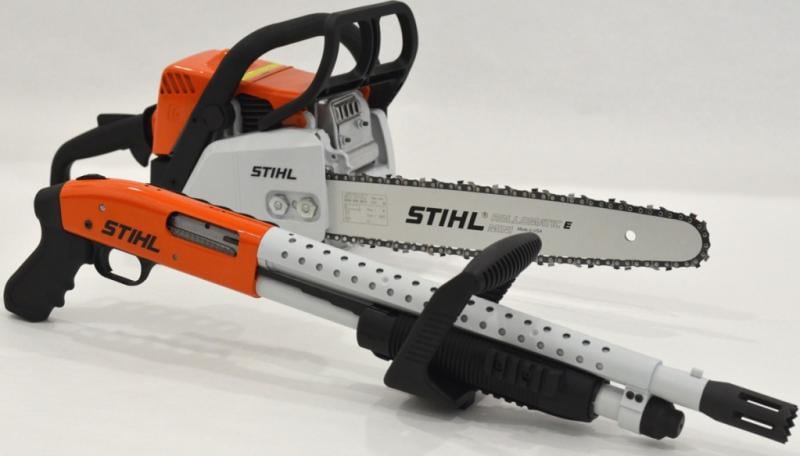 This Mossberg 500 Chainsaw has gone viral on the web.  And for good reason.  They’ve taken Mossberg’s metaphoric nod to the left hand handle on a chainsaw and pushed it to the logical limit.  And it is the perfect compliment for the literal Stihl Chainsaw.

I remember my father going after copperheads and the occasional coral snake with his chainsaw.  We lived in northern Florida, where winters were just barely cold enough to justify the use of our fireplace, and the woods were crawling with snakes that could kill.  While my father was fine to let them be, my mother was merciless on snakes.  This would have been the ideal gift for the two of them, as my father would have loved a good chainsaw, and my mother is mean with scatter gun.

But you have to get creative for a gift like this.  Custom work takes some planning. 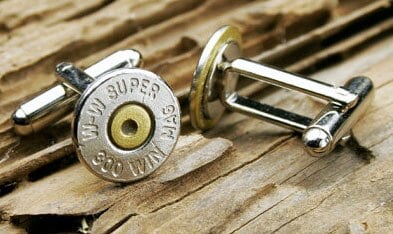 It is possible that your dad already has it all.  If so, gift giving gets complicated.  But there’s always an option.  The folks at Bullet Designs on Etsy are getting super creative with recycled brass.

Their 300 Win Magnum Nickel Bullet Cufflinks are made with recycled brass.  These are oddly formal, and certain to start conversation, if that’s what you want.  If your dad isn’t one to talk about his love of gun, these cufflinks are subtle enough to pass as simple formal wear.  And they’re very affordable at $19.95.

Get busy.  Time is running out.  And speaking as a dad, I’m inclined to care less about the gift, and more about the thought behind it.  If you get stumped, take your dad shooting.  Time together is what he’ll really remember and treasure.