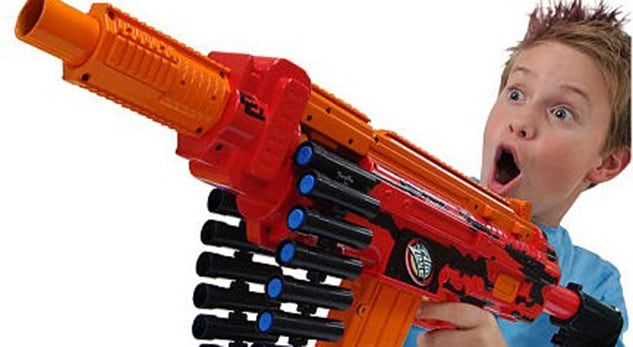 It’s looks as if the firearm buyback craze has turned a new page – targeting toy guns.

Apparently Strobridge Elementary School in Hayward, CA will host a toy gun buyback this Saturday. Kids who turn in their plastic pistols, Nerf shooters and rubberband rifles will be entered to win a bicycle. So, actually it’s more like a raffle, but who’s splitting hairs?

Charles Hill, the school’s principal, explained, “Playing with toys guns, saying ‘I’m going to shoot you,’ desensitizes them, so as they get older, it’s easier for them to use a real gun.”

Dubbed – Strobridge Elementary Safety Day, the event will feature a Hayward police officer talking about gun and bike safety. But the pro-gun group, Responsible Citizens of California aren’t sold on the event’s rationale. A spokesperson for the group, Yih-Chau Chang says,

“Having a group of children playing cops and robbers or cowboys and Indians is a normal part of growing up. While the intentions are obviously good on the part of the school administration, this doesn’t really educate children about guns or gun safety. Guns are used in crimes, but they are more often used in defensive ways which prevent violent crime from occurring in the first place.”

Ultimately, Hill said getting toys guns out of the hands of babes would also prevent potential accidents.

“Some of the guns I’ve confiscated, if they’re stuck down in a waistband, the average person would think it’s a real gun. I could easily see one of our sixth-graders wanting to fake out someone at a 7-Eleven by walking in there. They would think it’s funny, but it could turn into tragedy.”