We know, we know.  With ammo shortages abounding, these days it may feel like you can’t really afford to shoot any handguns.

But by the virtue of the thousands of pistols and revolvers out there in thousands unique and familiar calibers, it’s inevitable that some weapons are always going to cost more to shoot than others. There are however those select few pistols that, for whatever reason, cost and have always cost a small fortune to take to the range.

Guns.com looks longingly at the shortlist of these diamond shooters. 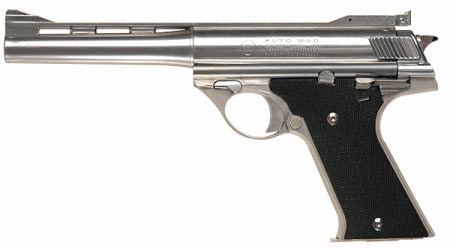 .44 Automag is an all around mother to shoot.

Around the era of Flower Power a firearms maverick by the name of Harry Sanford came out with a beast of a semi-auto pistol named the Auto Mag Pistol, or AMP. The AMP was envisioned to lead the charge into the realm of high-powered hunting handguns. Alas, it was not to be and by the end of the 1970s, the gun was practically as dead as disco. 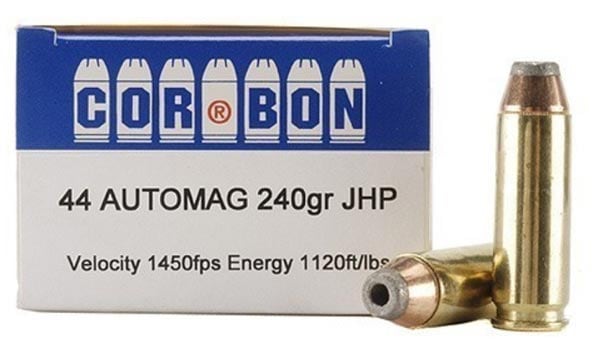 Corbon .44 Automag ammunition. If you can find a box these days, let us know.

The AMP was chambered for the .44 Auto Mag—a powerful cartridge that only two manufacturers, CDM of Mexico and Norma of Sweden, ever produced and never in great quantities. IF you are lucky, you can sometimes stumble upon old stocks of 1970s vintage AMP ammo for about $3 per round for ammo that is as green as a Boston Celtics’ jersey.

Recently Cor-Bon/Dakota Ammo started production of this classic heavy-hitter but even small quantities seem to be perennially on backorder.

As it goes then in AMP circles, if you do not reload, you aren’t a true owner. Moreover, don’t ever do the unpardonable sin of leaving any used .44 Automag brass behind. Picture Gollum from The Lord of the Rings and you come close to how .44 Auto Mag shooters feel about their brass.  My precioussssss… 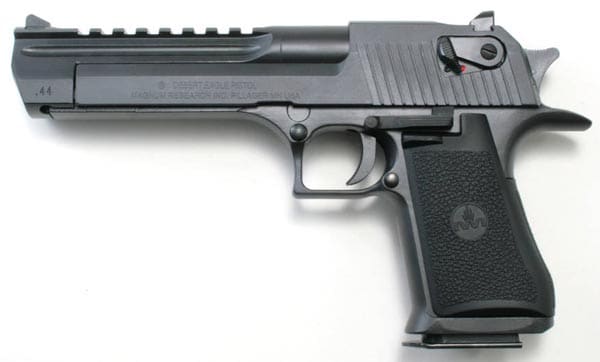 A Desert Eagle pistol, in .50 Action Express makes for an expensive date.

For that subset of guys who yearn to assassinate grizzly bears at bad breath distances or get into gunfights with cyborgs from the future, the Desert Eagle 50 was sent down from the mountain. 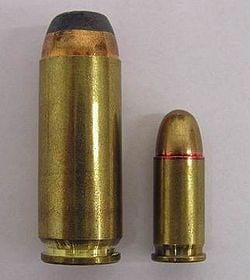 Overall, these are nice guns to have, but you wouldn’t ever want to shoot one on a beer budget. 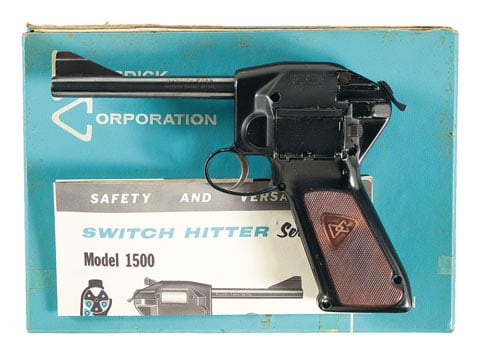 The Dardick pistol – an answer to a question nobody asked.

The Sixties were a strange time and that also went for firearms development. Like many of the thought leaders of the day, it seemed that one designer after another decided to get a little too radical and forward thinking to be practical.

One of these was a dreamer by the name of David Dardick, who came up with the concept of a triangular bodied round of ammunition called the (wait for it) ‘tround’ that could be fired and dumped to the side, eliminating the need for any sort of extractor, and in theory simplifying the pistol. 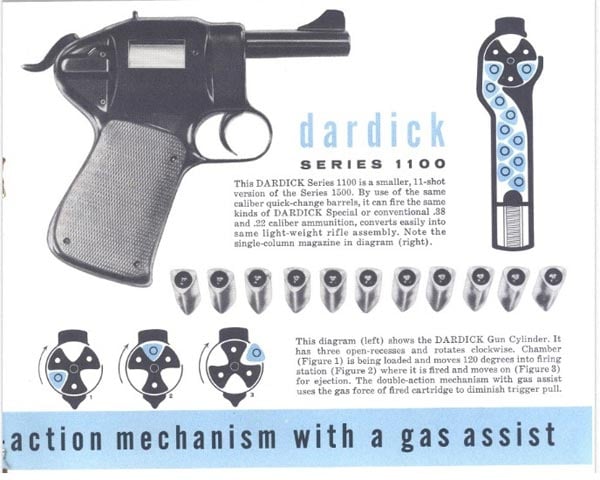 While he produced several Dardick Model revolvers firing a range of .38 (9 mm), .30 (7.62 mm), and .22 (5.56 mm) trounds and a couple of carbines incorporating this same design principle, the concept was a little too… “triangular” for the man on the street and his business efforts tanked.

While these guns are available today, good luck finding a couple cases of trounds to go to the range with. Individual rounds trounds run about $10—if you can find them—and if you do, keep in mind they are reload-able.

Trounds: so you don’t have to worry about your ammo rolling away. 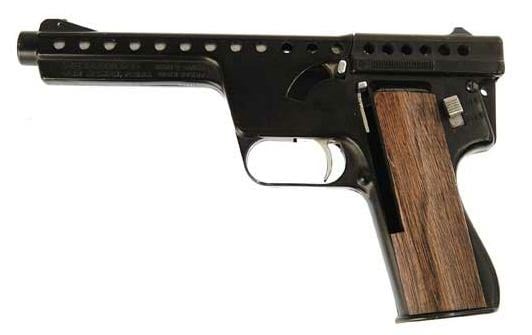 Gyrojet pistol, in all its woody glory. 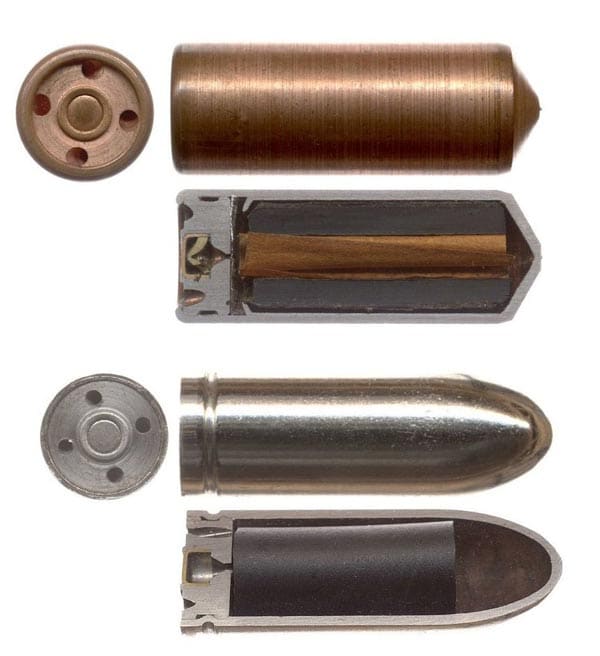 GyroJet cartridges, producing one of the strangest ballistic patterns ever fired from a handgun.

Speaking of 1960s and how good concepts turned into bad realties, let’s talk about the Gyro Jet series of pistols.

These pistols left the rails of established ballistics and were actually tiny repeating rocket launchers.

Yes, kids, instead of shooting cartridges with a bullet pushed out of a case by a propellant powder, the Gyro Jet triggered a tiny rocket that accelerated out of the barrel as a whole unit to impact a target downrange. Bad thing was that the rocket wasn’t very accurate, and because it had to “build up forward momentum” it wasn’t even powerful enough at distances close to the muzzle to cause any damage. Try wrapping your brain around that one.

You can come across these launchers but the ever-shrinking supply of rocket/bullets gets smaller every day, which has made collecting the ammunition a pursuit in itself.  Current prices tend to start at $50 and climb from there. A fully loaded a Gyro Jet will often double its value though it is worth noting that these rockets do not get better with age.

The Gasser revolver, looking both classy and creepy.

Back in the late 1800s in the small Balkan European country of Montenegro (it still exists, look it up), you were nobody unless you had a Gasser revolver.

These huge hog legs were so comically large that you almost expect when the trigger was pulled a flag would pop out that said ‘Bang’. Nevertheless, they cost a lot of money and King Nikola I even decreed that it was the law that every male citizen buy and keep one of these popguns with him at all times. This has led to quite a few of these now-100+ year old guns to be kept as treasured family heirlooms and for good reason. 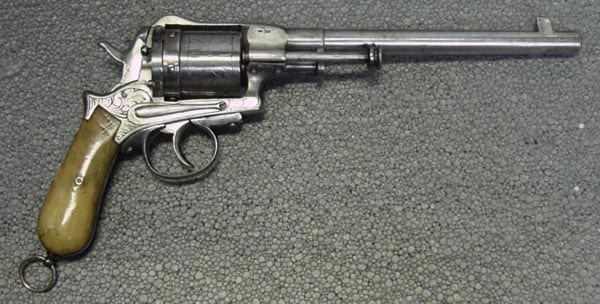 Montenegrin 11mm Gasser revolver, the most expensive of the Gassers to shoot.

However shooting these revolvers, often chambered in 11.25X36mm Montenegrin, is next to impossible (if you can even find a picture of one, please let us know). As far as we can tell, not even the small custom ammo houses like Old Western Scrounger turn these bad boys out anymore at any price. The closest you can get is cutting down 7.62x54R ammo down and reloading it with black powder. Good luck with that.

Overall, if you own any of the above and do not already have that stock of ammo to go with it, you may have a wall hanger on your hands. Unless you are a lotto winner, in which case, share the love (and take lots of video).