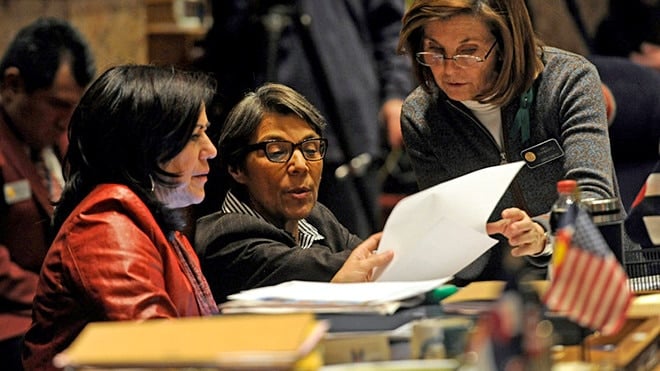 Colorado voters in Pueblo have gathered enough signatures to start a recall vote of Democratic Sen. Angela Giron following her support of the unpopular gun laws recently passed in the state, including mandatory background check on all firearm transfers as well as magazine capacity limits.

Giron is the second senator to face recall after voters collected more than twice the number of signatures needed to start a recall election of state Senate President John Morse (D-Colo. Springs). 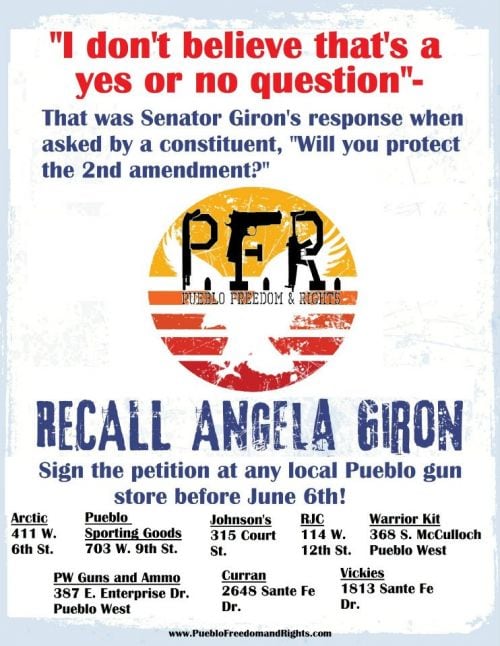 The recall effort was largely thanks to brothers Adam and Victor Head and their organization, Pueblo Freedom & Rights.

“Giron’s disregard for the majority of her constituents to vote no on anti-Second Amendment issues and her general disregard of our Constitution and the rights of the citizens of Colorado demonstrates she must be removed from the senate,” wrote organization president Victor Head in a statement.

“She just didn’t listen to the people of Pueblo. That’s why we’re recalling her. Our employee did not listen to her bosses”, said vice president Adam Head.

Giron defended her actions in a statement of her own, saying “What I do know from speaking with my constituents is they support the work I’ve done. … They know I’m a strong supporter of the Second Amendment and that the bills passed this session were carefully written to strike a balance between protecting our communities and families, while respecting the rights of gun owners.”

“This recall effort is based solely on fundamental disagreements — not wrongdoing — and if the necessary signatures are certified, I will fight it,” said Giron.

Likewise, Morse has stated that he will fight a recall election, as opposed to resigning. He also said that he would accept additional assistance from New York Mayor Mike Bloomberg’s group, Mayors Against Illegal Guns to keep his position as Colorado senate president.

“It is expected that that the Governor and Democrat Party including Bloomberg money may try to extend any election so as to prepare a campaign to try to save Giron should she try to run to stay in office,” said a PFR statement.

The organization has been collecting signatures for about two months. If either or both Giron and Morse are successfully recalled, they will be the first in Colorado’s history.

The secretary of state’s office is expected to complete the verification process of voter signatures to recall Morse this Friday. After that Morse and his staff will have two weeks to question the validity of any remaining suspect signatures before the recall election takes place.