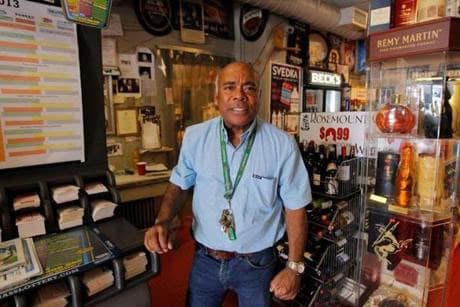 It was about 10:30 at night and about 90 degrees outside when the robber walked in wearing a ski mask. “I was shocked to see him, then I realized right away that it was an attempted robbery because he came into the store with a gun in his hand. I think I reacted well because he turned around and left … When I find myself in situations like this, I always think ‘the coward one dies first’ so I push all fears aside,” store owner, Arturo Taveras, told a Fox affiliate.

And fear is something well known by Taveras, who lived to tell the tale of an armed robbery in 2011, which left him with scars on his balding head. During that incident, two armed robbers came into the store and attacked him, pistol whipping him and binding him with electrical tape. After a four-hour long standoff with the police, the two were finally captured and are now serving time in prison.

Recalling the nightmare, Taveras refused to be a victim for a second time when the masked man walked into his store on Sunday, and once Taveras drew his gun, the man immediately left the store without further incident.

The man was caught on video surveillance, but his description is very vague since his face was covered. Taveras told the police that the man did speak English and did not have a heavy accent of any type.

Nearby store owners in the predominately Hispanic community, as well as the police, think that he did the right thing. Lawrence Police Chief John Romero said, “Taveras acted within the law, [with] every right to protect himself,” according to The Boston Globe.

Neighboring shop owners also state that Taveras is well-loved in the community. Manager of the Union Supermarket nearby, Juan Cepeda, described him as “a good man, a good neighbor, with good conversation.”

Taveras, who has been a licensed gun owner for more than 50 years, expressed, “I do whatever I need to protect myself, to protect the people, and to protect my business.”