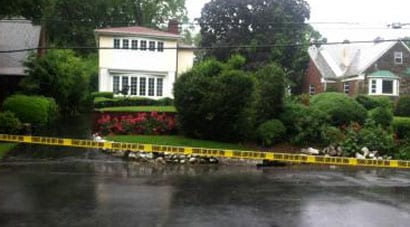 Two burglars broke into the home of a retired Department of Homeland Security agent on Friday. (Photo credit: DNAinfo)

On Friday afternoon two burglars broke into a home in Queens, New York, when they were met with a retired Department of Homeland Security agent, who, of course, was armed. He shot at the two suspects, but missed.

And, of course, as predicted, jokes are to follow.

The DHS agent, who has not been identified (possibly out of the need to remain anonymous and possibly out of the embarrassment of being a former federal agent who missed the target), returned to his Jamaica Estates home around 3 o’clock and apparently found the would-be burglars inside, according to DNAinfo.

The retired agent opened fire on the two suspects, but apparently told police that he wasn’t sure if he hit either of the men. Witnesses said they heard five or six shots – but definitely not more than seven, because that would have been not only extremely dangerous, but highly illegal – after which the two men were seen running away from the home.

An 11-year-old boy who was on his way home from school on a school bus saw the suspects, but didn’t know what had happened until after police blocked the road. At that point he realized the agent’s home had been broken into and told the police what he had seen.

According to the boy, whose parents asked that he not be identified, “I saw a guy running down Somerset Street. He was wearing a dark blue hoodie and dark blue sweatpants. Then I saw another guy coming out of that house, from the side door. He was jogging and he had his hand in his pockets. The two guys met up in the street and were talking for 10 seconds and then they both ran off fast.”

At the house across the street, a grandmother who doesn’t speak English heard the gunshots while babysitting her six-month-old grandchild. She ran into the kitchen and called the baby’s father, Bertrand Desir, who was just coming home as the incident occurred. However, he did not witness anything.

Maybe the Department of Homeland Security does need all of that ammo after all.

Following the incident, police searched local hospitals for signs of the burglars, but found no suspects.

The incident is still under investigation and police are still searching for the suspects, who were last seen wearing dark hoodies and dark pants and running very fast.

Meanwhile, Americans may be questioning the validity of the Department of Homeland Security’s controversial massive ammunition purchases. Perhaps with the displayed marksmanship of the retired agent, they actually do need 2 billion rounds of ammunition for training purposes, give or take a million.