Dennis Herrera, San Francisco’s City Attorney, is suing three out-of-state gun accessory companies for selling so-called ‘high-capacity’ magazine repair kits to California gun owners, which he claims is a violation of the state’s ban on the sale, manufacture or import of magazines that hold more than 10 rounds.

In a press release, Herrera argued that the repair kits are a “barely-disguised attempt to skirt a 14-year-old California gun safety law” and that “the disassembled equipment is intended for easy reassembly by purchasers into complete, fully functional high-capacity magazines that dramatically enhance the lethality of otherwise lawful firearms.” 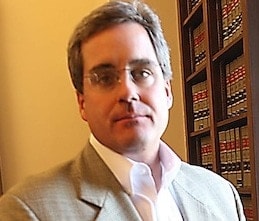 City Attorney Dennis Herrera sits down and talks with the Examiner in his office at City Hall. (Photo credit: Cindy Chew)

When the magazine ban was enacted on Jan. 1, 2000, all magazines capable of holding more than 10 rounds were declared a “public nuisance,” but law-abiding gun owners who possessed these devices before the law took effect were allowed to keep their magazines. In short, all mags purchased or obtained before Jan. 1, 2000, were grandfathered in.

Additionally, under the law, there is a provision that allows gun owners to seek repair and maintenance for their pre-ban magazines by licensed dealers and gunsmiths. It’s this provision, according to Herrera, that created a loophole in the ban, which has been subsequently exploited by vendors who sell the repair kits.

“Our litigation intends to prove otherwise,” he continued. California lawmakers enacted smart gun safety precautions to prohibit devices that serve no sporting purpose, and are clearly inappropriate for non-military uses. Our common sense laws balance public safety imperatives with the constitutional rights of responsible gun owners, and they deserve to be aggressively enforced.” 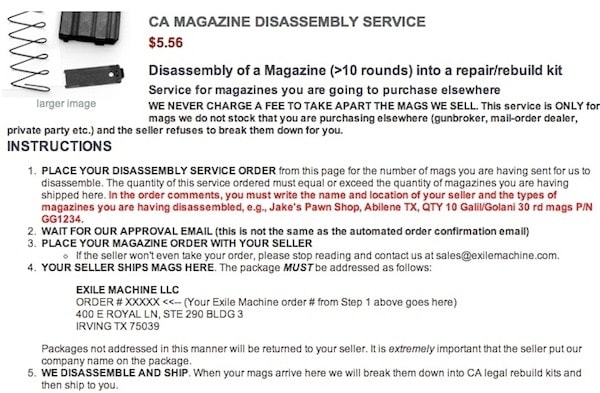 Undoubtedly, these companies recognize that they are cleverly toeing the line, finding a workable solution to the Golden State’s onerous gun laws and restrictions. For instance, Exile Machine LLC website states that the company “was founded in August 2009 with the mission of supporting firearms enthusiasts in restricted states.”

And with particular regard to California, the Exile’s website adds, “Our CEO lived and worked in California on & off over the last 40 years. We’ve got your back, California!”

Though in a California courtroom, it’s unclear how a judge or a panel of judges will view these magazine repair kits. While Exile maintains that what it’s doing is legal, citing a 2005 California Department of Justice letter that states it’s legal to “import newly manufactured parts to repair a legally obtained hi-cap magazine,” there’s no guarantee the judge or judges will agree.

What is rather clear, and as Herrera’s office pointed out, is that if successful, the legal action “could result in a court-ordered injunction to immediately prohibit further unlawful conduct by the companies, together with civil penalties of up to $2,500 for each act of unfair competition and legal costs.”

Let us all hope that Herrera’s efforts fail miserably.