An Arlington Heights man is suing his local police department after officers came to his home and confiscated his antique firearms and his valid Illinois firearms ID card (FOID card) without a warrant following a session the man had with a therapist. 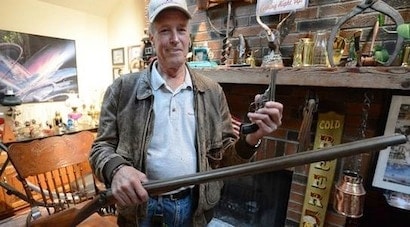 Arthur Lovi, 72, showing off some of his antique guns. (Photo credit: The Daily Herald)

In the lawsuit, Arthur Lovi, a 72-year-old Air Force veteran, claims the Arlington Heights police department — Arlington Heights is a suburb of Chicago and a village in the notoriously anti-gun Cook County — violated his Second and Fourth Amendment rights, causing him emotional distress.

He is seeking financial damages for the anguish he experienced as a result of the incident.

Last August, Lovi went to go see a therapist to discuss some issues that were bothering him. During the session, he told the counselor about his late wife, who died of leukemia, about the drowning of his granddaughter, the loss of his son-in-law to a drug overdose, in addition to other traumatic events in his life.

When the session finished, the therapist called the police because Lovi allegedly admitted to threatening a physician who misdiagnosed his wife’s illness. The doctor initially told Lovi that his wife had a common cold. However, the next day upon getting a second opinion from another doctor, she was given a correct diagnosis, leukemia.

“I’ll have hard feelings about it until the day I die,” Lovi said about the misdiagnosis in an interview with the Daily Herald. “Not that a day would make a difference, but maybe it would have. I’ll never know.”

For the therapist, she felt obligated to report Lovi’s feelings about that first doctor. When the therapist spoke to the police she told them she didn’t believe Lovi was a threat to himself or others, but just wanted to go on the record and report the alleged threat.

Well, soon after the conversation with the therapist, police called Lovi and asked him if he had weapons in the home. Lovi admitted to having three antique firearms and no ammunition. He also told police he was a law-abiding citizen with a valid FOID card.

Lovi believed that the matter had been put to rest, but at around 11 p.m. there was a knock at the door. It was the police. They demanded that Lovi turn over his firearms.

According to the lawsuit, filed by attorneys at the Chicago-based Meyer & Kiss LLC, Lovi asked the officers if they had a warrant and they responded by saying “they could go get a warrant and if he insisted they do that, they would come back and tear the (expletive) out of his house.”

Feeling as though he had no choice, Lovi forfeited his guns. The police report dated Aug. 30 confirmed this, it reads, “Lovi was cooperative and voluntarily handed over the weapons.”

He was not arrested nor was he charged with any crime, as the Daily Herald noted.

Also in the Arlington Heights police report was information about the first doctor who gave the wrong diagnoses. As it turns out, officers had contacted the man about Lovi and the doctor told the officers that he “did not feel like his safety was in immediate jeopardy.” In short, Lovi wasn’t a threat to him.

Yet, despite this, the police confiscated Lovi’s antique firearms anyhow.

But wait, there’s more to the story. So, Lovi calls the department in the aftermath of the confiscation and wants his lawfully owned property back. Instead of simply giving it back to him and admitting they made a mistake, an officer determined that Lovi needed a psychiatric evaluation.

Later that day, officers showed up at Lovi’s house once again and demanded that he go into the ambulance, which was headed to the Northwest Community Hospital. Lovi complied. And, after a day at the hospital, doctors determined that Lovi was not a threat to himself or anyone else.

Dan Kiss, Lovi’s attorney, believes that this second visitation by police was an attempt to show that Lovi was mentally unhinged, this way they’d be justified in taking his firearms.

“That’s an extreme abuse of power,” Kiss told the Daily Herald. “It’s bad enough to come to someone’s house and take their guns. It’s another to get them effectively imprisoned under phony allegations of mental illness.”

“The police are concerned about the safety of all people involved. It’s a lot to take into consideration,” Laine said. “We don’t have all the facts, and it’s extremely difficult for someone who wasn’t there to pass judgment on the case.”

As for the warrantless search and seizure of Lovi’s property, Laine said that can occur during exigent circumstances.

“There are many, many exceptions to the requirement that the police need a warrant, based on emergency circumstances and public safety exceptions,” he explained.

Lovi’s attorneys are pushing for a trial by jury. They believe Lovi’s peers will side with him in this case. As for Lovi, he believes this lawsuit is just about standing up for himself.

“I don’t start trouble, I don’t look for trouble, but if somebody starts it with me, I’m going to stand up for myself,” Lovi said. “That’s just the way I’ve always been.”