An Iraq War veteran with four months to live is fighting his landlord over threats of eviction.

Robert Lorentz is a 37-year-old former Marine who’s been battling terminal bone cancer since 2007. After a stint of homelessness, Lorentz managed to secure a small studio apartment in Phoenix, AZ. Gravely ill, his “street family” took it upon themselves to help the dying man – cleaning him, feeding him, lighting his smokes, fixing his meals and assisting him in the bathroom.

But according to apartment owner Emanuel Dobos, all the people crowding into Lorentz’s studio are causing disturbances, bothering other tenants and trashing the small complex. Dobos claims he has tremendous sympathy for Lorentz and doesn’t want to evict him, but is concerned the cancer victim’s caregivers are simply squatters looking for a crash pad.

“They kiss, make out in front. They fight. They do all kinds of stuff,” Dobos said. “I don’t think that (Lorentz) wants them there. He’d rather have peace and quiet.” 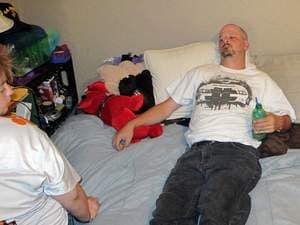 Lorentz pays about $590 a month for the studio, which is covered through a homeless advocacy organization. Despite the apartment complex’s multiple code violations and all-around cruddy appearance, Lorentz has never missed or been late on a rent payment. But on any given day, as many as six people can be found in his apartment sitting and talking with the disabled Veteran.

“I’m deadly scared of hospice and nursing homes,” Lorentz said from his bed, where he’s largely confined to. “This is around my family. It’s close to my clinic. It’s where I want to be.”

Dobos says he’s bent over backwards for the Veteran, giving him a verbal eviction notice three months ago and a subsequent 30 day letter to vacate the premises – but the problems have continued unabated. “I’ve tried to reason with them,” Dobos said. “I have tried not to evict him. But something needs to be done.”

Arizona law tends to favor landlords and evictions can be executed swiftly – leaving Lorentz in a precarious situation. Ultimately, the dying Vet just wants to be left alone long enough to visit the Grand Canyon and a chance to go fishing.

“I’m a Marine,” Lorentz said. “I know being a fighter will keep me alive for more than four months.”