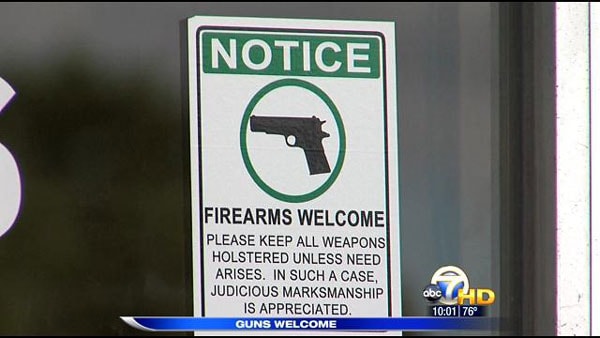 Judicious marksmanship is appreciated, but so is the sign that says so, according to some. (Photo credit: KATV, Little Rock)

The owner of two Schlotzsky’s Deli shops in North Little Rock, Arkansas, has stirred a bit of controversy after posting a sign at each of the restaurants. The sign simply assures concealed handgun carry license holders that they – and their guns – are welcome in his business.

A local news station reported that while some say they are thrilled he posted the signs and are more likely to visit the restaurant because of it, others are appalled at the sign and the fact that it invites the eatery to be like the “wild west.”

However, the shop owner, Jim Magers, claims that his motivation to post the signs was not political, but rather business and safety oriented. “This is simply an accommodation for people that are legally licensed to carry,” he said.

And that accommodation is one that some appreciate and will likely result in increased business. As Don Hill, owner of Don’s Weaponry in North Little Rock, points out, sometimes these small signs – either welcoming or prohibiting firearms – will determine a customer’s decision to enter the business. “I went to buy a car the other day. I went up to the thing and it said, “No Firearms Allowed,” so I turned around and walked out, went to another business and bought a car,” Hill told reporters.

Magers also addressed the issue of safety and said, “You either allow it or you don’t and if you don’t they’re forced pretty much to leave it in their car or not come to your business.” And apparently Magers feels that a firearm left in a car in the parking lot is much more dangerous than someone with a valid concealed carry permit bringing a firearm into his sandwich shop, which if properly concealed will never even be seen anyway. “They don’t have to think about leaving their guns in the car where it’s less secure and it might become a risk to the public,” Magers said.

Of course, businesses in Arkansas are not required to post such signs in order to allow those with a valid CHCL to bring concealed firearms inside, but if business owners want to keep firearms out of their establishments they are required to post signs on every entrance stating such.

Magers also told reporters that he would be taking polls at both of his sandwich shops to get reactions from his customers on how they feel about the sign being posted.