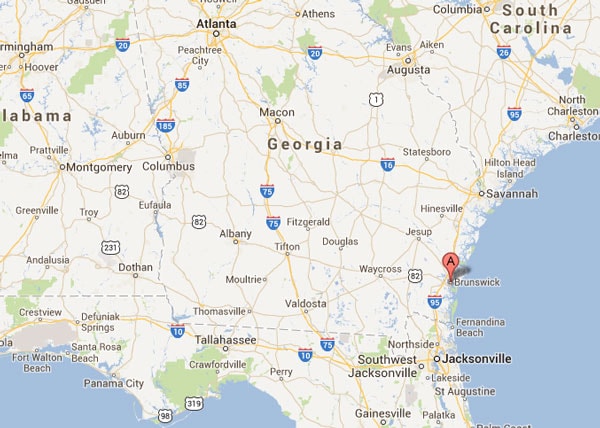 A Georgia homeowner opened fire on a would-be robber wearing a mask and holding a knife, shooting him multiple times in the back and butt.

The incident happened around 11 o’clock Saturday night in Brunswick, Georgia, a town about 80 miles south of Savannah and the same coastal city where a 13-month old baby was shot in the face by a two teenage boys during an armed robbery in March.

According to the Glynn County Police Department, apparently the resident heard somebody ring the doorbell, but when he looked, there was nobody there. A few minutes later, he heard another ring of the doorbell. This time, the 36-year-old resident, who has not been identified, armed himself with a .45-caliber handgun and walked outside onto his porch.

Outside he was greeted by a would-be robber, later identified as Anthony Don Devine, 45, who was wearing a mask and armed with a knife. Devine immediately lunged at the resident and, fearing for his life, the resident shot Devine several times in the back and buttocks, then went inside to call 911.

When police arrived on the scene, they found Devine near the front door, suffering from several gunshot wounds. He was transported to Glynn County Fire Department and later moved to Memorial Medical Center in Savannah for medical treatment.

There was no word on the condition of Devine and police did not offer any information as to whether any charges are expected to be filed against the resident. However, Georgia does have a Castle Doctrine Law as well as a Stand Your Ground Law. What this means is that, according to Maj. Randy Robertson of the Muscogee County Sheriff’s Office, “Citizens who find themselves in situations where they find themselves threatened with severe injury or death can protect themselves with whatever level of force necessary.”

While there are some stipulations to the Stand Your Ground and Castle Doctrine Laws, it seems as though the resident would be justified in shooting Devine, as there was immediate and imminent physical danger.