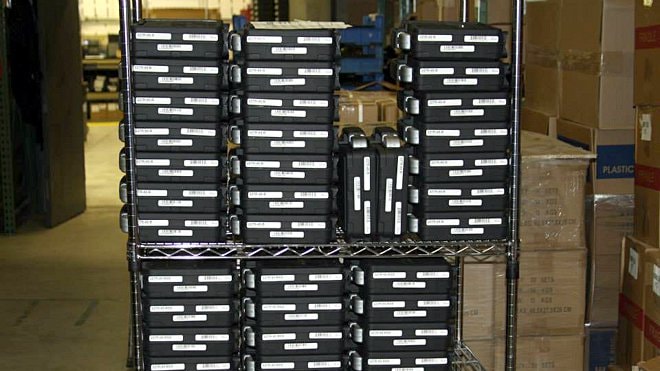 Stacks of SIG P227s which are heading to distributors now.

SIG Sauer’s newest “classic” P-series pistol is now shipping to distributors. SIG put up photos of the guns being assembled and packaged for shipping on their Facebook page.

The P227 is a staggered-stack pistol chambered for .45 ACP. It uses a completely new frame to house the sizeable magazines. The gun ships with 10-round flush-fitting magazines standard, while SIG is also going to make extended 14-round magazines available as well.

We confirmed rumors of the new gun late last year, and SIG later officially announced the pistol at SHOT Show 2013, where we handled the gun and spent some time with it at the range. 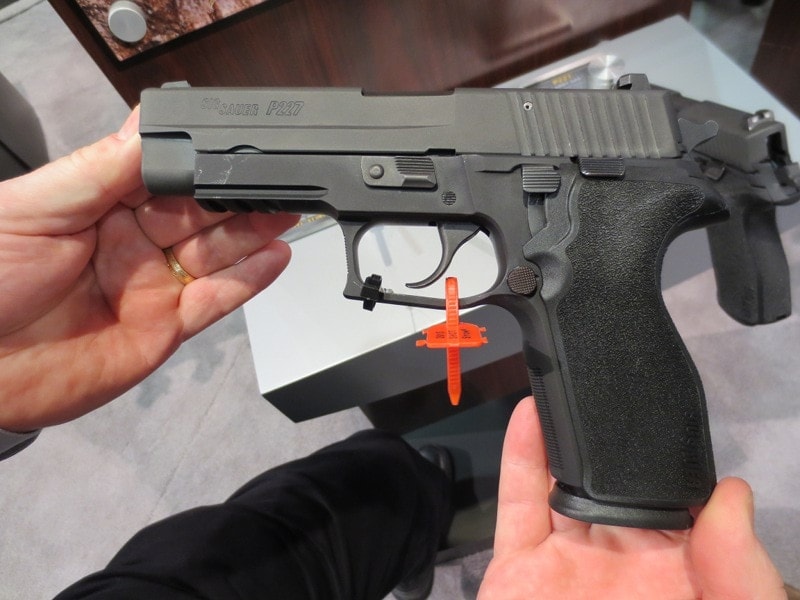 SIG is launching the P227 with three versions, the standard full-size P227 with a 4.4-inch barrel, a compact P227 Carry with a shorter 3.9-inch slide and barrel and an SAS (SIG Anti-Snag) model with a rail-free dust cover and dehorned edges to make it more comfortable for concealed-carry.

All three models sport the “Nitron” matte black finish and come with E2-style grips. On these .45s, the E2 grips are roughly the same size — if just a tiny bit smaller — as other double-stack P-series pistols with “classic” grips — the P227 is not a small gun. People who find the new grips too small on other SIGs will not have that problem with the P227.

The triggers are the same as on other SIGs and for now all the P227 have standard DA/SA triggers with decockers. 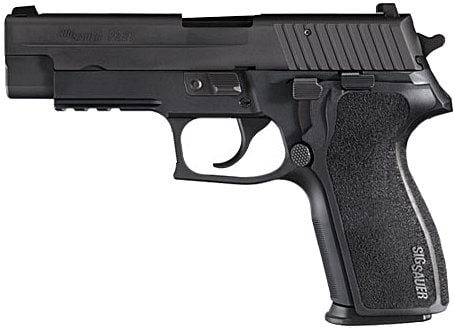 Shooting the P227 was nice. It would be hard to find anyone who had complaints about it. Although SIGs do have somewhat high bores which can prove to be a bit jumpy with any .45, the grip texture makes it easy to control and the alloy frame is not so light that the recoil will become an issue. The full-size P227 actually weighs a little less than a P226 — 32 ounces compared to 34 with the 9mm. On the contrary, the lightweight frame makes it very easy to maneuver. The P227 is just right — a .45 you could shoot all day, ammo availability notwithstanding.

Functionally the P227 is no different from other P-series SIGs and even the slides are compatible with P220s. The P227 should fit with most holsters made for P220s and P226s. The differences are all in the grip portion of the frame.

It’s also priced in-line with the other classics, with the basic P227’s MSRP at $993, night sight models including the Carry $1085 and the SAS model $1,125. While real-world prices are usually a bit lower by a couple hundred bucks, the newness of these guns combined with the current state of the market makes us not want to guess at what they’ll retail for in stores.

But if you like SIGs and you like .45s, this gun really ought to be on your short list. And pretty soon, you’ll be able to see them in person. For all the details, check out the product page.