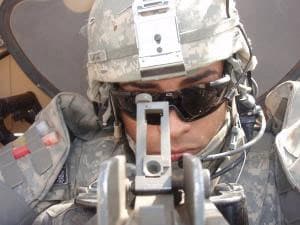 Funeral services were held in New Jersey on Wednesday for U.S. Army Spc. Jeremias Ortiz, 26, who was shot and killed by an armed intruder in his own home earlier this month. According to The Atlanta Journal-Constitution, he was buried with full military honors and about 100 people attended the service.

The shooting occurred while Ortiz was stationed at Fort Stewart, Georgia, living in an off-base apartment in Hinesville. On June 1 after Ortiz and his wife, Raulani Quintanilla, returned home just before midnight from an evening at the movies, they heard an unfamiliar noise in their apartment. Ortiz grabbed his gun and soon confronted an armed intruder wearing a ski mask, later identified as 21-year-old Kyle Perry, who also lived in the same apartment complex.

According to his wife and a friend who was also present at the time, Ortiz pleaded with the Perry and warned him several times to just leave the apartment. Ortiz’s older brother, Angel Ilarraza said, “My brother was trying to get him to leave the house. He didn’t want to kill him.”

But Perry didn’t back down. Instead he fired at Ortiz, striking him in the head and neck. Ortiz fired back, hitting Perry in the arm before he ran from the apartment. Maj. Thomas Cribbs of the Hinesville Police Department confirmed, “It appears that the intruder fired first.”

Ortiz was transported by helicopter to a Savannah hospital, where he died the next day. Perry was brought to another hospital by his mother, where he was arrested and charged with murder, aggravated assault, burglary, theft, weapons possession and marijuana possession. Police also confirmed that the gun Perry used was stolen.

Ilarraza expressed, “I think my brother is a true hero. … It’s not like he was out and about on the streets looking for trouble like some knucklehead. He was at home.” He recalled life growing up in the tough neighborhood of the Speer Village housing project in Passaic, New Jersey. “My brother grew up as a troubled teen,” he explained. “He went in the service and wanted to change his life.” 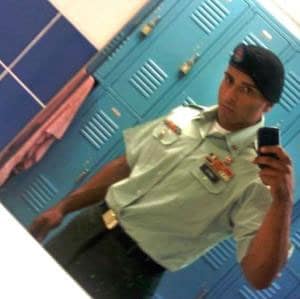 Ortiz was a high school dropout who later got his GED. He had survived the street violence of the NJ housing project and survived a dangerous duty in Iraq in which he helped to remove explosive devices as part of a road-clearing unit. Only to have his young life ended violently by an armed intruder while attempting to protect his home, his family and friend, all the while hesitating to take the life of another human being.

Ortiz’s parents still live in Speer Village, where his father, Severiano, works as a maintenance man. Victor Cirillo, executive director of the housing authority said, “It’s a terrible tragedy. Our thoughts and prayers are with the family.”

Ortiz had planned to make a career of the military and wanted to have children with his wife.